In a Q&A session at Gamescom, Diablo III designer Josh Mosqueira said they are “very, very serious” about bringing Diablo III to a console platform. They won’t say which one they’re developing for, though past job openings on the Diablo III team for PlayStation 3 specialists might be something of a hint. A quote from the Kotaku write-up. 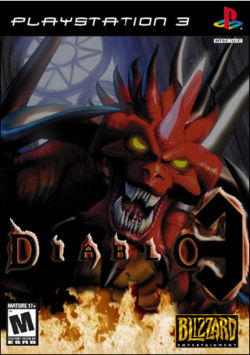 “Today, we’re trying to build the best console team at Blizzard,” Mosqueira said during a Q&A session. “We’re looking for programmers, designers and artists who think their dream job would be to bring Diablo to the console.”

While neither announcing nor confirming Diablo III for a Sony, Microsoft or Nintendo console platform, Mosqueira promised “All I can say is it’s going to be awesome. Stay tuned.”

It’s quite possible that the eventual console version of Diablo III will be great, but really… “dream job?” If your dream job is helping to water down Diablo III to make it playable on a much less powerful home gaming system without a proper keyboard or mouse…. you might want to have a word with your career counselor.

In other Blizzard gaming news from the same Q&A, Blizzard has no current plans to develop a Starcraft MMO, since all their developers are working on other stuff.

‘If there was a development team within Blizzard that was free and available to create a StarCraft MMO and that was something they were really passionate about then we would certainly consider it…But right now…, we’ve got our hands full with everything we’re doing.’

‘We don’t really have any plans to do anything beyond the StarCraft RTSes and the expansions right now,’

“We don’t comment on rumours or speculation,” was the initial answer World of Warcraft lead designer Tom Chilton gave when Brian Crecente asked him about Mists of Pandaria, the strange trademark application that came to light earlier this month, leading many to believe it was the name of the next World of Warcraft expansion pack.

Pandaria refers to the homeland of the Pandaren, anthropomorphic panda bears that have long been the subject of jokes between Blizzard and Warcraft fans. They appeared in Warcraft III and play a role in the World of Warcraft pen-and-paper RPG, but for the most part they’re naught but a legend in World of Warcraft proper, subject of tales of a hidden city locked away from the rest of Azeroth.

Update: Surprising number of complaints about the console joke in comments. It’s funny writing news posts with opinions and jokes to make them more interesting than just straight quotes or fanboy praise; we never know quite what will set some people off. Everyone likes (or at least doesn’t dislike) 99% the conversation, and then there’s that one thing that for one person triggers /ragequit bookmark delete!

We saw console versions of D2 and SC1, and “watered down” was far from the most unkind description that could have been applied. One hopes D3’s console version will be a big step up, but due to the technological limitations of current consoles, the ported versions of big PC games are watered down, and must be played without a proper mouse and keyboard. This may become less true in future generations of consoles, of course, but for now… it is what it is. See my reply in the comments if you want more debate about this silly issue.