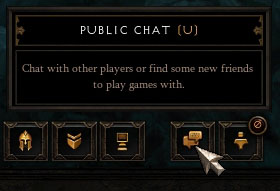 The Diablo III Beta is now online (sporadically) after the lengthy patch 13 install, and once I got on the first thing I checked out was the new chat channel feature. It’s functional, if rather underwhelming. I certainly hope it’s also in the beta form, since it looks like something you’d have used on AOL in about 1992.

The window only appears in a tiny space in the lower right of the screen, there’s no list of people in the chat, and there don’t seem to be any formatting options, ways to see more details about the people there, views of their characters or accounts, etc. As I said, hopefully this is just some Beta version they whipped up in the past few days; you know after Bashiok said they didn’t have them, and then the huge public outcry forced Blizzard to quickly implement them while ordering Bashiok to cover for them by saying that he’d somehow been unaware of the existence of a major game feature he’d argued persuasively against two days before. [ /tinfoil hat disengaged] 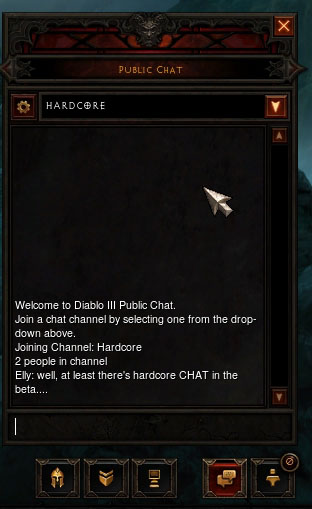 Update: In my first quick look at the chat I missed the options button, which does open up a display of everyone in the chat. You can invite them to party, or add them to your friends list, as you can see in the screenshots below.