A few weeks back, the night before the long-awaited v5 Beta patch, we saw the Skeleton King get one shot killed by a Barbarian using the Weapon Throw skill. It was a very near thing, with the crit dealing 1362 damage to the 1351 hit point Leoric, and I didn’t think we’d see that again in the beta. Not with Leoric’s hit points now increased to 1718, and Weapon Throw’s damage lowered from 210% to 180% weapon damage. 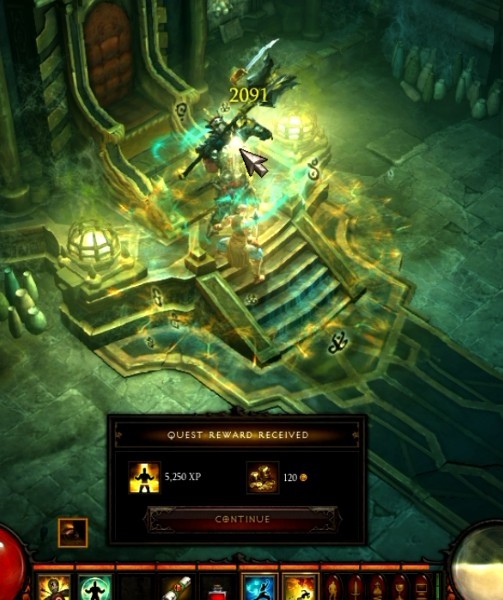 There are other IMBA classes and skills in the beta, as today’s video demonstrates, with the

Skeleton King going down to a single use of a single skill. The culprit this time is the Monk’s

Lethal Decoy, which was modified reworked in the last patch.

This greatly upped the “lethal” while largely removing the “decoy” from the skill, turning it into a smart bomb with a very short fuse, and when you take a Monk with 300+ damage (from all gear), multiply that by 330% weapon damage, double that with a crit, and add more damage from the Frenzied Shrine effect… and the results are gruesome. Well over 2000 damage — easily enough to finish off Leoric before he could even lift the maul from his shoulder.

The video shows the final level, plus you get a chance to eyeball all of the Monk’s gear (which is good, but not amazing) after the battle. Thanks to KuangTu for the tip and Diablo3.cc for creating the movie.