Site reader Nuri points us to a new Diablo 3 beta hands-on article posted on Dutch site InsideGamer.nl. Better yet, Nuri sent along an English translation of the piece. It’s not just one of those subject/verb disagreement Googlebot translations either — Nuri actually typed out the whole thing in English. Here’s a quote, and you can read the whole thing by clicking through. 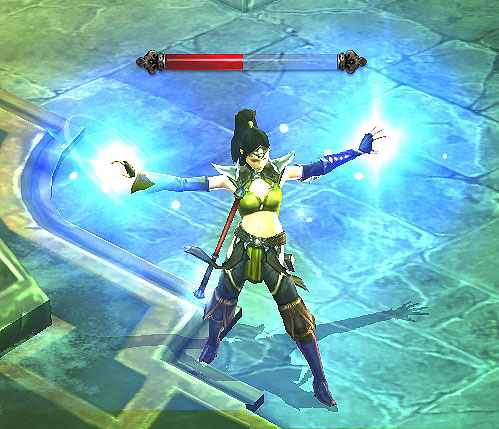 Needless to say, big thanks to Nuri for his efforts.

From the very first second, it becomes obvious that things are truly messed up in the world of Diablo. There is a kind of zombie walking around that needs to be put six feet under as fast as possible. The monk does that with his ‘lightning fists’, hitting so hard that after three strikes, the first enemy lies on the ground bleeding, resulting in the very first experience points. After defeating a few other enemies, the first pile of gold appears on the ground. You no longer need to click the gold in order to pick it up like in the previous Diablo games. Just walk in the vicinity and your character will pick it up automatically.

The whole article, which is written for complete noobs to the game, and perhaps even to the RPG genre. There are a few minor errors — you can not adjust your character’s facial features or hairstyle, the 1-5 keys do skills, and the the beta is not all of Act One — but it’s not a bad read. Original Dutch language version here.

Early 2012, that’s when Diablo III should be in stores. A game Blizzard has been working on for over five years and that was presented to the general public in 2008. With any other game, you will see that the enthusiasm declines after such a long time, but in Diablo’s case, that is by no means true. When the beta was released last week, Twitter and Facebook were filled with positive reactions. And after finishing the beta, it’s clear why; it’s a game in which an incredible amount of love was invested, and it just radiates from the game in every way.

The beta will keep you occupied for about six hours and lets you see the beginning of the game. But before you take one step into the demonic world, it’s time to create a character. In my case, I went for the Monk, a class that combines close combat with magic attacks. Of course it’s possible to adjust the character, in terms of facial expressions and the way your hair looks, but honestly I didn’t give a damn. Hence I entered the world with the default bald and grumpy Monk.

From the very first second, it becomes obvious that things are truly messed up in the world of Diablo. There is a kind of zombie walking around that needs to be put six feet under as fast as possible. The monk does that with his ‘lightning fists’, hitting so hard that after three strikes, the first enemy lies on the ground bleeding, resulting in the very first experience points. After defeating a few other enemies, the first pile of gold appears on the ground. You no longer need to click the gold in order to pick it up like in the previous Diablo games. Just walk in the vicinity and your character will pick it up automatically.

Soon enough you will arrive at a settlement and the first quest will be fired at you. If you would like to help the guards of the settlement for a bit in slaughtering a large group of enemies? But of course you do! Together, you will hit away and peace returns. Then the ‘real’ story begins, which should be seen as one long tutorial. You will be walk from pillar to, um, hell, and everywhere you go, there is always something amiss. Whether it’s three enemies of a certain sort that needs to be dealt with or a book that someone has lost, you’re constantly occupied.

As you explore the world by jumping from quest to quest, the experience points will come pouring in and you will gain levels. In the early game, every new level opens up a new skill, which you place in one of the two skill slots. If you manage to advance to the sixth level, a new skill slot will be obtained and thus, new alternatives to beat off enemies. After all, that’s what you will be doing for the larger part of the game: fighting enemies. The fighting system lives up to its promise well. After starting the game, you will immediately know how to do stuff. By bashing away on the left mouse button like a madman, you will thump away, while the keyboard numbers one through six can be used for your skill slots. In the Monk’s case, you will gratefully use a combination of close combat attacks and healing spells. Just maniacally charge at an enemy and when things go wrong, call in the gods’ powers to mend the sustained damage.

The game is very approachable from the beginning, which makes sure you will easily fit into the game and finish the beta in one play through. Having said that, the beta isn’t too long. It’s really the first chapter of the game, where you learn all the basic principles beside the story. Take the inventory system. After picking up every weapon you find, you automatically open your ‘backpack’ in order to see whether or not the weapon or armour is an upgrade to your existing gear. These kinds of items exist in many degrees and classes. The more special weapons make use of bonuses. Bonuses that yield extra experience or make your health bar refill quicker. The difference in gear ensures an eternal search for upgrades. You will find yourself destroying every crate you stumble upon, hoping that you will find that one unique item.

And if the found item is less interesting, you can still make good use of it. Within the inventory system, it’s possible to immediately trade your items for gold. Or you can break up the items, so that raw materials will appear to craft very special weapons with. There is simply an incredible amount of stuff to find, to decide and thus to experience. That’s why it’s a pity that the beta is finished after six hours or so, after an epic boss fight. In it, you will take up arms with another character against an enormous skeleton monster, in which you will really need throw everything you have at it in order to survive. It’s a fitting end of a very fascinating start. The game looks good, plays great and offers – despite the butchering of monster after monster after monster – enough variation and simply has all the makings of one of the best games of 2012.