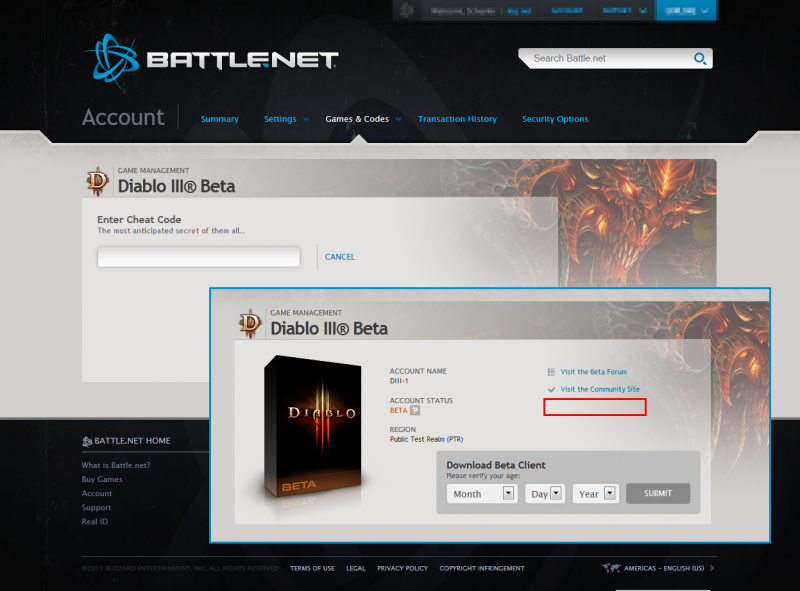 A couple of weeks ago, a B.net forum user found a hidden entry line in his Diablo 3 beta account page. You can see the invisible space in the image to the right; it’s inside the red rectangle.

Fans speculated about this apparent

Easter Eggfor a bit, and then after a few days Bashiok dropped by and did his usual thing; tossing down some snarky humor/encouragement, with words that were clearly a hint, in retrospect.

“While the Hell Bovines are numerous and bloodthirsty, the same cannot be said for their heavenly counterparts.” —Account of Sanctuary Cattle, author unknown

Finally today, someone figured it out, and guessed “starcow” for the code. That worked, and enabled a Nyan-cat styled bonus animation, before resulting in a new look to the Battle.net Diablo III account display. You can see pics of those below.

Congrats to the people who solved it, and apologies from everyone involved in the creation of Diablo III that you had the time/motivation to puzzle it out in the first place. Thanks to Douglas, Chris, Bloodwarxxi, and Jiflyon for sending in news about this. Click through for a video of the Starcow, plus a Diablo Nyan that’s been floating around for a while, and of course the original Nyan Cat video, if you need a refresher on this particularly meaningless meme.

Video of what happens when you enter the code.

The original Nyan Cat movie. Info about the meme here.