In all the ongoing “accessibility” debates, the complaints have always been that Diablo III is watering things down for the masses. In light of that, it’s interesting to see a blue post replying to someone who actually thinks some aspect of Diablo III is too hardcore for their taste.

My dad, my brother (and his three kids) and I were looking into playing this game, none of us care for gore much, it’s quite the turn off. I did enjoy D2 a lot growing up, but then too the gore was over the top, and D3 takes it even further.. I’m all for people getting their fill of gore if that’s their thing, but will the game be released with some kind of reduced gore option available? There was a lot more to D2 then making demons guts rain down, and being able to reduce gore will be a major selling point for my family as to whether we get the game.

I know some countries (Australia and Germany) have some insane censorship with respect to gore, if Blizzard markets D3 there with reduced gore and then included those reduced gore graphics as an option in the U.S. version, that would be nothing short of awesome.

We don’t currently have any plans to provide reduced gore options. The game is rated M for Mature, which is a 17+ rating, and we encourage parents to remain aware of game ratings, the content in the game that led to that rating, and keep them in mind when choosing which games are appropriate for their family. 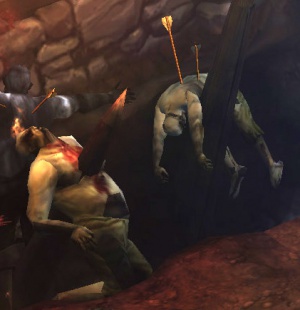 I’ve never thought about it before, but in retrospect it’s surprising that Blizzard did not include options to turn off or down the gore. If they had I’m sure some fans (like me) would have bitched about it as further evidence of mediocrity via accessibility, and suspected that even the “full gore” setting would be wimpier than desired. But in their efforts to avoid including anything that might scare off casual gamers, it’s odd that the developers overlooked this one.

That said, I must give credit where it’s due and point out that the gore, horror, atmospheric intensity, etc, are all very well done in Diablo III, and that they have not watered down these core elements of the Diablo series. (Aside from removing the pentagrams and crosses.) See the Horror article in the Diablo Wiki for numerous blue quotes and player testimonials about this issue; it was one of the first things I looked most closely at, when I got hands on with the first playable Diablo III demo back at BlizzCon 2008, and the gruesomeness of that early version of Old Tristram (which was much cooler than the version we see in the beta) reassured me.