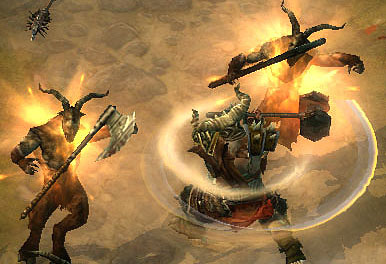 Here’s some coverage from the Diablo 3 Character and Monster Panel, held Friday afternoon from 1-2pm. The main focus of the panel was on the Monk, which was followed by some coverage of recent changes to other skills for other characters. That was followed by extensive discussion of monster development, with a 15 minute audience Q&A at the end.

Since we just posted an intensive bullet point list from the Monk section, I’ll save my write up of that aspect of the panel for a bit. Instead, here’s coverage of the skills for other characters that were recently changed and modified, with the monster discussion to come later.

The first skill change was a

Witch Doctor skill; Spider Statue. This one was in use at last year’s Blizzcon, and it was functional, but not very impressive. The spell was a sort of poisonous spider trap; a small statue like spike poked out of the ground and spiders by the thousand buzzed around it, swarming any enemies that came into range. The team felt this was too busy looking, and just visually messy. They also felt it didn’t give players a clear idea what was happening or why damage was being inflicted.

The improved version had been renamed. This skill is now called

Carrion Spider, a summoning spell that causes a human corpse to erupt from the ground. This gruesome zombie sits up out of the earth and vomits out a large, milky-colored spider, before sinking back into the ground and vanishing from sight. The spider then functions as a minion, racing over to an enemy and latching onto them, dealing considerable poison damage for some duration of time. The spell can be cast repeatedly, just to watch the gruesome zombie animation, and sometimes the spider actually bursts through the zombie corpse’s chest, rather than waiting to be vomited up.

Wizard skill was Stone Skin. This one works much the same; the Wizard casts it to greatly raise her defense, thus gaining a temporary defense against melee attacks, The previous graphic was hard to detect; a rough textured sort of graininess that didn’t show up well on the slender Wizard. The new version is quite different and impossible to miss. The wizard is now sheathed in glowing blue crystals, almost like some superhero made from sapphires. In fact, the skill is so different in look that the team is probably going to rename it, though they’ve not settled on a change from Stone Skin, yet.

Barbarian‘s new skill is Whirlwind. Nothing has really changed about the function, but it’s gotten much more swirly in appearance. More dust is also kicked up, and there’s a stronger graphic of spinning yellow light around the Barbarian while he WWs his way to glory. The motivation for this change was more interesting than the change itself. One of the new monsters, found in the desert area and seen in the Blizzcon demo, is the

Dune Dervish. This monster has a whirlwind sort of attack of its own, spinning around to deal heavy damage, as well as reflect incoming projectiles. That’s good, but as the team pointed out, it looks better than the Barbarian does in his Whirlwind. Or better than he did, previously.

Of these changes, I was least impressed by the Barbarian’s new WW graphic, and I won’t be surprised if they change it again, or perhaps dial down the swirling doom of the Dune Dervish. The Barb’s new WW just looked somewhat busy and messy, with a lot of gray and gold swirls, like dusty water going down a drain.

Fury works. This property replaces mana for the Barbarian, and Fury must be built up during battle to expend with higher level skills and attacks. The Team didn’t like how it was working last time, since it forced players to wait around. They had to land multiple normal hits to build up enough Fury to start doing powerful hits, and that wasn’t fun. So they tried giving the Barbarian almost unlimited Fury, while limiting it with reduced damage. That didn’t work either, since it didn’t really change the game play at the high end, and in the meantime no one did anything but the biggest skills, and felt annoyed when they weren’t sufficiently damaging.

Unsatisfied, the team took the concept back to the drawing board, and realized that they weren’t really designing Fury to work with the Diablo style of gameplay. They’d been trying to force a system into place, and had been somewhat adapting the WoW style of resource management to the much faster paced, more combat-intensive Diablo world.  Jay Wilson stressed that he wanted the Barbarian to feel massive, and to feel that he was growing more powerful during battle, as he increased his Fury. Jay wanted him to “Hulk out” to use the parlance of the comic book character.

Their current (but not necessarily final) solution is to give the Barbarian a very fast recharge to his Fury. He can use it quickly, but he’ll also regain it quickly, based on the damage he deals. This rewards skilled play, since if you really nail your enemies, big targets or lots of small ones, you’ll get your full Fury back and can go right back into another vicious skill-based attack. If you squander your Fury, not using it to fight with skills, or using a huge skill on some pitiful little target, it will not recharge sufficiently, and you’ll be forced to use normal attacks while you build it up again. (Nothing about PvP applications was mentioned; they’re not to that point in game balance yet.)

skill runes. They are disabled in the Blizzcon build, and Jay Wilson explained why. Simply put, the team isn’t happy with how they at this point. Some runes are great in some skills, but a lot of skills and a lot of runes don’t work well together, and it’s providing a very uneven play experience. So the team turned them off entirely for Blizzcon, since they didn’t want fans playing around with them and getting an uneven or misleading experience from what the team wants to be a very core, central, important game feature.

They repeatedly stressed that skill runes are in the game to stay, and that they’ll be a big part of character design, play, and strategy. They’re just off the table for now since they need a full overhaul; one the team didn’t have time to give them before Blizzcon began.