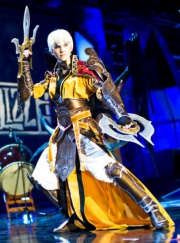 Christina Estrada, the 2010 BlizzCon costume contest winner (for her female Monk outfit), recently visited Blizzard Irvine. And they posted a really bad picture to prove it. You see it below, with Christian flanked by

Josh Tallman (who really lives up to his name).

What I found interesting was atop Christina’s head. As you can see from some of Christina’s modeling photos, (you may wish to take a closer look at her WoW bikini mage photos, purely to evaluate her costuming skills) she has long brown hair. Or at least she did in 2010 when the photos are dated from. The female Monk hair at Blizzcon last year was clearly a wig, but as we see in the recent photo from Blizzard, either she wore the wig again just to visit Blizzard, or she’s cut her hair short and dyed it.

Is she staying ready to throw on the female monk gear at any time, without needing a wig? Did she think they wouldn’t recognize her at Blizzard without that hair? Or did she just like her look with the short white hair in the monk costume, and thus decided to recreate it in real life?

The Best Diablo Cosplay from Blizzcon 2014