A fan asked about the

Monk‘s perpetual combat stance in the Caravan video from Gamescom, wondering if there were relaxed town stances in Diablo III.  A reply pointed out that the

Barbarian uses one in the screens from the same build, and Bashiok came in to confirm.

Some of the screenshots from the Gamescon press kit had the Barb standing next to the blacksmith. His arms were at his sides, totally relaxed.

So with that, I’m guessing the mechanic is still present.

It is. What you saw of the monk was simply because his animations weren’t complete yet. When you enter a town or while speaking with an NPC you take a relaxed, non-combat stance.

Given the time and care and amount of artwork the D3 team is lavishing on the game, could anyone have expected otherwise? It just looks odd seeing a character in an aggressive combat stance when speaking with a peaceable NPC like 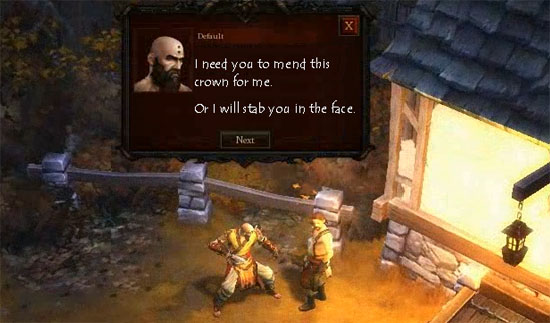