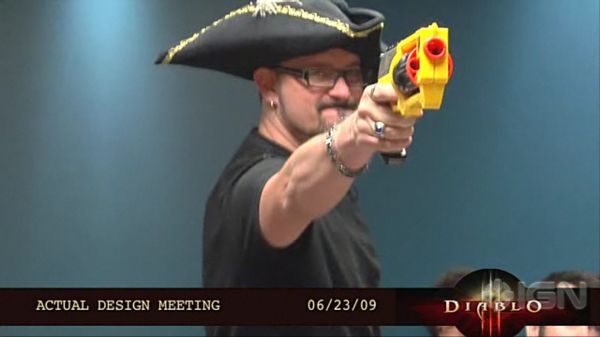 The ever-growing San Diego Comic Con kicks off today, and while Blizzard has no plans for official booths or new info releases, some of their artists will be on hand, and plenty of their employees will no doubt make the 100 mile drive down from Irvine to see some of the sights. As far as official attendees, the only one I’ve seen confirmed is

Here’s the official description, from the SDCC site:

Metzen is known as one of the head lore guys at Blizzard, but it doesn’t sound like this panel will cover anything in terms of game story or world fiction. Just toys. Shiny plastic dolls many of us covet to fill the empty space atop our desks and bookshelves.

Diablo Merch article in DiabloWiki is up to date and thorough, and makes clear that there really hasn’t been that much D3 merch for sale yet. We’ve seen a few t-shirts and mousepads and wall calendars, we recently saw the D3 headset and mouse, and there was that huge and expensive Barbarian statue, but that’s it. No wide variety of posters, no other action figures, no comic books, etc.

I’m sure we’ll see a lot of that stuff eventually, and things like comics and additional Diablo Novels are being held up until after the game releases because SPOILERS. But still… moar? Now? Affordable hand-sized plastic monster and character dolls collectibles?