There have been several useful Blizzard CM posts of late, and here they are.

Followers as well as to your hero. (This could have been in for weeks for all I know, since it’s been that long since I used the

Templar.) Here’s the quote from Vasadan.

It is currently intended that all buffs in the game, including shrines, buff both the player’s character and follower.

The main addition in the v6 Beta patch was Achievements… at least that was the plan. Bashiok says they should be working soon, though.

Achievements are currently not being awarded, and haven’t been for most of the day due to a server-side issue. We’re aware and working to resolve it. Sorry for the lack of notice before now.

A fan asked an intelligent question about the Barbarian’s

Cleave. Since it does 120% damage to the target and 90% damage to other things it hits in the wide sweeping arc, what is the damage if you’re using it with shift+click, so you’re not actually targeting anything? Bashiok replies confusingly, then adds an update with new skill info that makes the question a moot point. 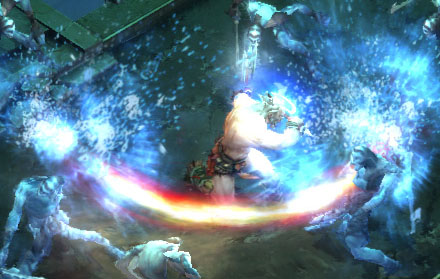 We want as much information available in the game as possible, within reason, and a reasonable amount of information is really fairly basic to keep tooltips from becoming small novels.

Cleave is an ability we’re looking at right now. We may actually make it so that there is no damage disparity between your target and collateral hits. In any case, the way it’s intended to work, if you’re holding shift and not targeting anything, is that the first creature you hit takes the 120%. I’m not sure if it’s actually implemented that way right now, and as I said could change anyway. Our intent is not to make shift+hitting/casting anything act in a way that is less effective than if you were clicking directly on enemies, so I don’t see any need to call anything out when the net result is the same (enemies die).

…As an update Wyatt just changed it to be a flat 115% to all targets caught in the swing. We’ll see how that works out.

Click through for one more post in which Bashiok happily admits that Blizzard doesn’t innovate in their games. (No, really.)

Finally a fan contributed a generally-incoherent rant which brought out the ornery in Bashiok.

I think that can be a game-killer. I feel D3 is beginning to suffer from Over-iteration. Also, battle.net Queues?

Give me a break, increase your infrastructure capacity, putting a paying customer in a Queue doesn’t look good, PERIOD. Activsion Blizzard no good. You will become a victim of your success.

No disrespect to my comrades, but what was the last Blizzard game or feature you’d call innovative?

runestone system, and those are both in the game you’re criticizing.

In my opinion we make awesome, polished, accessible games that are fun for a huge spectrum of people, but when I think of the word innovative our games don’t jump to mind. We make iterations and polish on what are fairly well understood systems and ideas, and that process has created our games and our company.

I realize I’m jumping on one little part of your post, but you ended it with a conspiracy theory Activision|Blizzard boogie-man jab so I think I’m afforded the ability to ignore the rest of it.

Sadly, a Blizzard PR employee referring to the ever-present danger of corporate interference from a company headed by a man with Bobby Kotick’s track record a, “conspiracy theory boogie man” doesn’t make it any less real.

That point aside, is Bashiok being too hard on Blizzard games? Do you think there’s innovation above what he’s saying? Have you ever seen Panda bears in another video game? (Oh wait…) Or is innovation overrated? Are new features in games less important than balance, polish, fun factor, etc?

You could also argue that innovation is better once it’s been reworked. Look at how poorly-produced and packaged new features are their first time out? For instance, take Set Items in D2, and then compare how much better they were handled in D2X. (With hopefully further improvements coming in D3.) What do you want to bet that Runestones will be a much better system in D3X than they are in D3V(anilla)?