Bashiok has made a few quick forum posts this afternoon.

In the first, a fan asked if we’ll see shields in Diablo 3, and Bashiok confirms that yes, all the classes (including the 5th, apparently) will be able to use shields. With one exception.

We have shields. Everyone but monk can wield them.

Of course that’s subject to change. 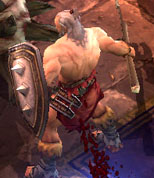 This seemed like a silly question when I read it, since I saw plenty of shields drop while playing at Blizzcon the last two years, but after searching the screenshots and character art, I realized that we’ve never only seen one character using a shield in a screenshot, but never in a piece of concept art. (Monsters and NPCs aside.)

There are doDozens of Barbarian dual wielding art and screens, but only once with a shield. Interesting, that;

Barbarians are always showing off huge weapons in their concept art,

Witch Doctors are lightly-armored and magical, and

Monks can’t use shields at all.

It’s (almost) enough to make you wonder if the

fifth character will have some kind of sword/shield mode, in addition to/instead of being a bow/ranged weapon master? (Sadly, the lack of a

weapon switch hotkey in Diablo 3 rules out this sort of character design/variety.)

A fan suggests a major healing spell for each class, with some examples. Bashiok explains (again) why that’s not the way of character design in the Diablo games.

auras, abilities that buff, help, directly or indirectly heal yourself and party members, these are all good mechanics to helping cooperation in

multiplayer games. And we’ll certainly have some of them.

What we don’t want though is a situation where you’d say “Ok just sit back and keep us healed.” Everyone should be fighting, everyone should be DPS, and the buffs and bonuses that come from certain classes should simply be situational and/or beneficial “icing on the cake”.

A fan asks if a zookeeper type build will be viable for the Witch Doctor, and gets Bashiok to say why not, while sharing some useful info on little-documented spell

Fetish army is really the only mass-summon spell the witch doctor has. The fetish army spell effects are coming along too, it’s looking pretty amazing.

But it’s really more of an AoE that happens to do its damage by sending out little dudes to fight.

The witch doctor is more about using a small number of summons as damage soaks, and then casting spells for the majority of his damage. Some of which are themselves larger one-off summons. He’s not a mass summoner, that’s just not the intended flavor of the class.

Finally, someone confuses Wang Wei’s (Glowei) personal art with Diablo 3 concept art, and asks if we’ll see the fifth class announced soon. Not so much. (Next class reveal won’t be until Blizzcon, which will probably be in the Aug-Sept-Oct area. Patience is advised, as always.)

You’re not going to find anything in Wei’s personal work. Sorry guys.

Update: Thanks to PrinceofThieves for pointing out the one screenshot with a shield in use. Image added above.