Bashiok replied to a couple of posts about the Witch Doctor. First up, a complaint about the WD’s resource.

The Witch Doctor shouldn’t use mana
At least, not by name.

I’m fine with the mechanic (consumable, regenerates itself, pool grows when leveling up). But I’m not ok with the name.

Mana is so universal that, with the other classes having unique resources, it doesn’t feel right. If even the mage, the mana user for excellence, can get a new resource, why should the witch doctor keep with the old resource?

I would suggest renaming it to something more in the style of the class (sorcery? witchery? voodoo? you get the idea) and maybe, change its color, too. Green would be fine.

Bashiok: The resource UI never moves. You could cut out a piece of yellow cellophane and tape it over the mana resource circle, turn it green, and then call it whatever you want.

Really it’s called mana because it is the classic mana mechanic, which works well for the


Last year, while talking about possible changes to the

Arcane Power resource, the devs floated the idea of changing the WD’s resource from mana to something more swamp-themed, and changing the color to green. Apparently that didn’t happen, though Bashiok’s suggestion for a modification involving tape and tinted pellucid plastic on the monitor is an amusing one. See, Blizzard does support modding in Diablo 3!

Elsewhere, a fan plots a monster-killing attack on other players, and gets shot down.

I’m going to PK in HC and get rich doing it. You don’t need to hostile, you just need to back stab.

My first character will be the Witch Doctor, and I will trap people next to monsters using

Zombie Wall, there will be no escape except death. Then I will loot their corpse, rinse and repeat.

Bashiok: There’s no player collision. You can’t block others, only monsters can do that. (exception being in the arena against enemy players, of course).

Please do let us know if you have any other ideas though, we’re always curious about potential griefing mechanics. 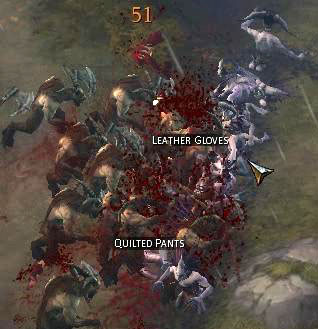 While I approve of anti-griefing efforts in general, I’m not sure I like this one. Running into other players or their pets is annoying, especially in areas with narrow corridors (ask any old time D2C player about trying to move around the docks of Kurast with or near a Reviving Necromancer), but shouldn’t a solid wall of zombies be… a solid wall of zombies?

Can the Witch Doctor run right through his own Zombie Walls as well? If so that seems very exploitable; just cast the wall to block the monsters,then run through it to safety. In my view, placing the wall correctly is the main skill in using it, and if you can just run through it, that’s gone. I doubt we’ll be able to spam the skill like Bone Walls in D2, but even if only one or two walls can exist at a time, that seems like a very easy escape from danger, for the WD.