Bashiok gave a joking reply to a fan’s question about an adorable new semi-monster seen in the Blizzcon 2010 demo, as well the gameplay movie.

At the beginning of the new gameplay trailer there’s a small demon with a big pot of gold. If you attack him, he runs around throwing the gold all over the place. A very cool idea btw

My question is: What happens if you don’t kill him? I guess he won’t throw endless amount of gold around? Will he eventually run away? If that’s the case, is it better to let him live (till he runs away) or to kill im instantly? (maybe he leaves more gold behind if you kill him faster!?)

Second question (and/or suggestion): Does he only throws gold? Or is there a slight chance that he’s letting a gem or a rune behind!? (would be cool) I hope there’ll be a lot of monster types like this (with special mechanics)

He also has a small chance to drop a white cloak which is white and longer than your average cloak or cape.

Bashiok’s comment references a WoW item, if you were wondering what that joke meant. 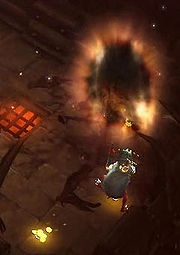 Treasure Seeker article in the wiki. I saw this guy in maybe 1/3 of my PvM demo play throughs, and managed/took the time to kill him with a Demon Hunter and a Wizard. He giggles and scampers around like a cracked out goblin, dropping gold the whole time, items occasionally, and generally tempting you into a fevered pursuit, which you’ll eventually win since his pathfinding sucks and he runs into corners and stuff to let you catch up.

When you put him down he drops like a transcendent chest, fountaining items and making it worth all the trouble. Not that it’s a great deal of trouble if you’ve got a ranged attack.

He’s a very engaging and amusing character, but he remains somewhat mysterious. Does he actually steal items from chests? Does he have any sort of attack? (He never tried to attack me, but I never killed him with a melee char; maybe he turns and fights if cornered?) And what’s with the oddly-colored portal he creates in the gameplay movie? Can he escape through it or send items through it,or can players perhaps pass through it into a magical world of gold-pooping rainbow unicorns?

I found the little guy a lot of fun, and not just for the flashbacks he gave me to my old arcade days on Gauntlet II with its racing, giggling, maddening Thief. Are you guys interested in seeing more Easter Egg-like monster such as this, breaking up the endless kill kill kill gameplay style?