As we’ve talked about in news and during the last podcast,

Runestones are not going to be included in the Diablo 3 Beta build. They wouldn’t have been found there anyway, since Runes don’t start dropping until around Act Two, but even if they didn’t, they wouldn’t. Because they’re being reworked, with a un’id’ed/random mod sort of feature being tested out.

In the podcast conversation we didn’t have the full info, and assumed Runestones would just get a bonus property. Not so, since as

Jay Wilson explained during the media event, Runestones are now “unattuned” when found, which means you don’t even know what kind of runestone it is until you socket it! (When the magical mod shows up as well.) Before then you only know the level of the stone; not the type.

That feature, I don’t like. It just seems annoying and sure to confuse noobs. (Which, as we know, is the single unpardonable sin in Diablo III development.) Bashiok seems to agree on those points, as he elaborated on in a few forum replies. (And no, I’m not changing my opinion just because he shares it. Bliz PR employee or not!)

Is rune system revamped?
Bashiok: Personally, I love it, and hope it finds a way in.

I’m not so sure about rolling to see which rune effect you get (it could still work), but I *love* the idea of random affixes. That you could have a end-rank rune for the skill you want, with the effect you want, but you still don’t have ideal stats on it. That just makes the min/max item hunt that much cooler, and makes runes more important than… “Oh, I found another Crimson rune. Great. /salvage”

Yeah, but it makes it harder for me to see everything that could potentially be on my rune. I won’t know what “perfect” is without digging into the game and even then, what are the chances of me getting the rune I want.

I don’t like the random aspect of this part, I feel like randomizing my skills isn’t a great way to go :(.
Bashiok:Pretty unlikely you won’t know what’s available with an auction house at your finger tips.

And if we’re just talking about affixes, we’re talking about min/maxing. You’re going to know what affixes you want because you’re already pretty deep into your build.

I don’t expect a new character to pick up a rune, roll affixes, and then throw it away because “ew it has attack instead of defense”. Probably not going to care much early on.

Ya, I suppose that’s definitely true. But you also have to take into account that it’ll be randomizing the type of rune as well, correct? So I only have a 20% chance of getting the rune I want, regardless of whatever affix is added.

Maybe if each rune type dropped instead of “unattuned” runes, then I’d at least be able to get the rune I want and hope I get a good affix on it. 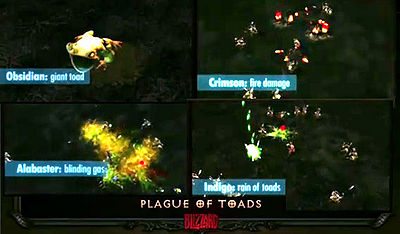 Bashiok: Well, like I said I don’t know if that part of it will work out… I just want the randomized affixes. 🙂 Makes runes so much more compelling as an item.

I’m confused as to why this was put into place… I have the idea, but it seemed like the ‘faced’ rune system was better, since we got to know what it was.

*goes into general global channel*
New Player: “HOW DO RUNES WORK!?!?! Someone help! I’ve found all these runes but it keeps changing my skill around!”
Bashiok: That sounds about right. Well, like he [Jay Wilson] said, it’s still just hallway discussions at this point.