A fan pointed out that the male Barbarian sported a blue war paint in one new shot, but not in another and got an interesting reply from Bashiok. 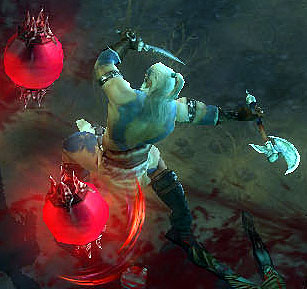 Hi, I’ve noticed two screenshots, on each of them the Barbarian looks different, In one he got warpaint in the other he doesn’t? Is it a new feature that allows you to add warpaint and/or tattoos to your character? Or has the skin of his model been changed?

Bashiok: The barbarian will see a throwback to the classic blue war paint when equipping a specific gear set.

Is it something similar to say, wearing Aldur’s on a Druid and the other class-specific sets for other classes?

Bashiok: …No, it’s just the effect from the chest piece of one ‘tier’ set.

Class specific items are still planned, but this would not be what it is, no.

At first look I thought the OP was mistaken, since there are other shots from the same area with the Barb’s paint showing. But on closer look (as pointed out in comments) he’s still got his starter gear (hand axe and buckler) and is probably “naked” in the no-paint shot. To appear painted, he has to go up to a leather vest, which is presumably the first chest armor (of 18) in the

gear set progression, and in those shots he’s upgraded to an axe and sword, as well as put on some armor..

It’s interesting what Bashiok says, that the tattoo doesn’t show when the male Barbarian is simply not wearing any armor; he has to wear a certain chest armor, and in it he looks topless and tattooed. (To see the female Barbarian in a similar state, you need Spring Break + Jell-O shots.)

You can see what the “topless” armor looks like in the screenshot with the Blacksmith, since the inventory window is visible in which we can see a sort of leather vest on the paper doll.

There aren’t any other recent screens of the topless barb to compare his gear, but he’s clearly got an unpainted back in this shot from the WWI 2008 gameplay movie, when he’s not wearing any armor at all. 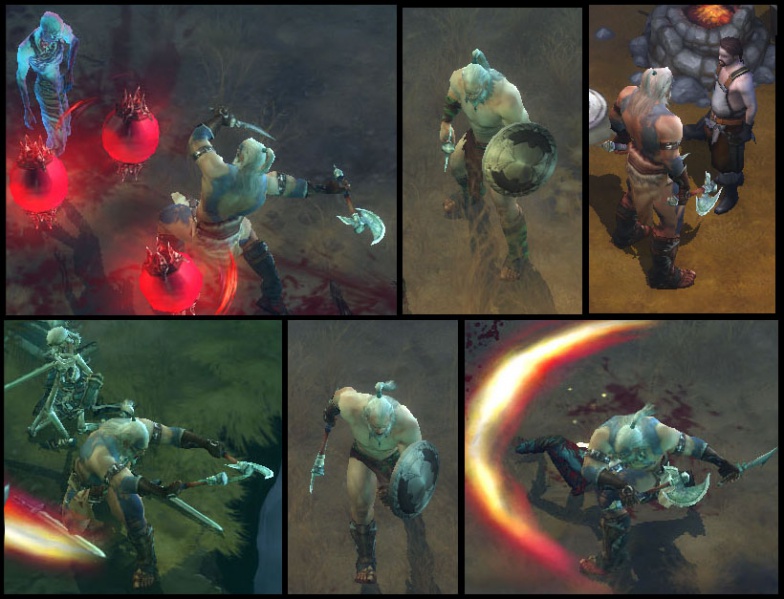