Bashiok shared out a few replies about

Monk skills and his

Spirit resource this afternoon in the B.net forums.

Does spirit naturally deplete after not being used for some time?

Bashiok: No. Spirit is static. It doesn’t regenerate, and it doesn’t degenerate. Punching demons and using melee skills builds Spirit, and most monk skills spend it.

Is it true the Monk’s

Bashiok: The barbarian shouts are powerful, limited duration buffs that you must re-cast once they wear off. Monk auras are very similar. [edit – corrected monk aura mechanic description to contain factual information]

Will the UI allow for keeping track of which combo you’re on? His combo skills are really exciting but I’m worried it’ll become too much of a chore playing the entire game counting out my attacks in sequences of 3. It would be unfortunate to unleash a 2nd tier hundred hand attack at range expecting to dash forward because you miscounted.

Bashiok: We don’t want tracking of combo stages to be so important that there needs to be a UI element to keep track. It should be that if you’re up on your game you’re tracking combo stages and it helps you get a slight edge, but if not you’re kicking ass anyway and will probably do fine. Also, we have made changes to skills so they’re consistent; such as making all stages capable of a dash. We don’t want the situation you’ve described to be an issue.

Do charges expire, or can I hold onto my level 3 charge until I want to unleash it?

Bashiok: It will reset after a time, but it’s a good amount of time.

I think what Bashiok means is that if the first part of 100Fists was a dash, then the second and third parts would also include a dash.

Bashiok: Right. The final stage on combo skills is still usually the powerful topper. I was specifically referring to a movement component not being tied to a specific stage of a combo skill (if it exists). There is some spreading out of mechanics to ensure really important pieces like movement and damage mitigation can’t be ‘missed’ because you counted wrong. But doing damage is doing damage, for the most part, so big combo finishers still very much exist on the third stage.

Bashiok: The Diablo III barbarian has only ever had one true shout, and a couple others which have similar limited duration buffs. But, multiply that by 5 for runes and we have 15 shouts, compared to Diablo II’s … six? I think.

rune doesn’t change the mechanic of the shout, but most do. We’ve covered most if not all the Diablo II Warcry tree shout skills through rune effects. 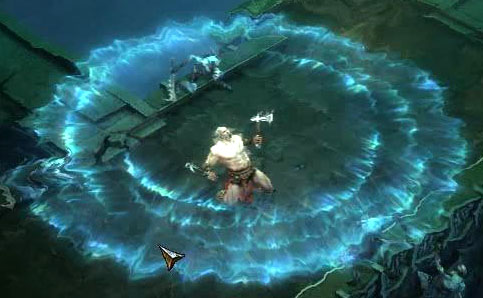 Runestone effects in the Barbarian’s shouts (warcries) and the Monk’s Auras should be a rich and fertile field to investigate. The Barb in D2 had several fun but little-used offensive warcries, along with the buffs that pretty much everyone used on their Barb. As of Blizzcon 2010, the D3 Barbarian had a lot of shouts:

Wrath of the Berserker. (Some might have been removed or combined since then.)

Of those, only Taunt wasn’t a self/party buff, and none of them had any offensive or direct damage components. Do some of them now? Apparently, if Bashiok’s comment about the rune effects replicating all of D2’s warcry effects is accurate. With this many shouts and the potential for up to 6 different functions for each of them, it seems like the Barb could have a huge variety of potential powers, up to and including full on Singer Barbs with a lot more variety of power than the build could manage in D2.

Resist Aura (+resistance). The auras basically work like Shouts; you cast them and enjoy the benefit for X seconds afterwards. With four Auras and up to 5 different rune effects in each, the Monk could replicate every single one of the D2 Paladin’s auras, though let’s hope there are more and better and even more varied effects, none of which have yet been revealed.

Man, do runestones add a lot of possibilities and variety to the game…