A fan posted a nice tidbit about the Blizzcon 2008 gameplay movie. At the 1:17 point, the Witch Doctor levels up a good second after a large battle has ended. Why/how? Just lag?  Perhaps not.

This is very likely the explanation. It seems about the right amount of time before the combo XP is awarded. 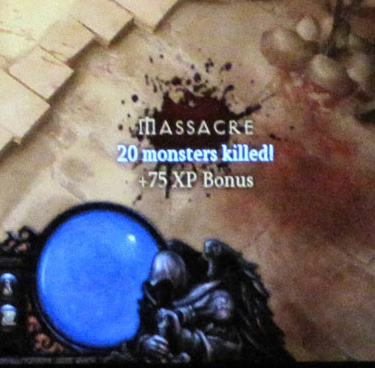 The UI does not display in that game movie, so there’s no visual indication of the

kill spree. (Other than the level up animation happening a moment after the battle ends.) Besides, it happens to the WD, not the Wizard who is recording the film. I don’t believe that characters saw the text display for the kill spree pulled off by another character in their game, but that seems like something we’d want to see in the final game. It would be fun to know how many straight bangs one of your party members just scored.

The movie is embedded on the click through. Jump to about 1:10 and watch the last bit of the battle, before the level up *WHONG* kicks in just afterwards.