Bashiok shared some technical information about how the calculations for hitting and being hit have been changed in Diablo III.

While defense/armour in D2 was calculated by a chance to hit rating (attack rating vs armour rating), in D3 it has been shifted to a damage mitigation system which, as far as it makes sense to me, means that any attack that connects will indeed be processed as a hit that deals damage. However this will not translate into, “ALL attacks will automatically hit” as differently than, for instance, WoW. In that game you have to either swing a weapon or throw a projectile (magic energy included) into the target’s hit-box in order to count as a hit, meaning aiming skills and strategic positioning will dictate the occurrence of hits, instead of percentage based luck, and therefore the outcome of battles.

Bashiok: Pretty much. Essentially all attacks have a flat 5% chance to miss, with the exception of most ranged spells, AOE, and abilities with larger resource investments. There’s no blanket rule that’s easy for me to lay down to show which can’t miss and which can, it’s sort of handled on a case by case basis. Most melee attacks have a 5% chance to miss, but then some melee attacks can’t miss because the resource cost is substantial.

It’s sort of common sense in a way, that a range attack has to be aimed and connect with a moving target so a chance to miss in in the player’s skill, so no need to have it on the ability (some exceptions exist). AOE just doesn’t make good sense to miss because if the enemy is in the area of effect that’s their bad. Skills with big resource costs have that investment in them, so giving them a chance to miss feels lame. Skills that can miss are usually the low/no cost melee attacks, spammable attacks, etc. And no, there is no stat or way to augment/reduce chance to miss.

So would I be correct in assuming that it is the same for monster attacks versus a player?

Bashiok: Yes, you would.

This is a big change from D1 and D2, where high defense meant enemies had a lower chance to hit you. In Diablo III, the

defense system is based not on hit avoidance, but on damage reduction. It works much like

resistances worked in D2. Thus heavy armor and high defense doesn’t mean you won’t be hit, it means you’ll take less damage when you are hit. Note that

shields in D3 are also rated on how much damage they can absorb, rather than their ability to vanish 100% of damage any time they block, as was the case in D2.

As Bashiok says, this seems more logical, especially when dealing with melee attacks—if you have a pillow and you’re standing right beside a guy wearing full plate mail, you’re not going to miss him (very often) when you swing. You just won’t do much (or any) damage, since your weapon is too weak to penetrate his armor. 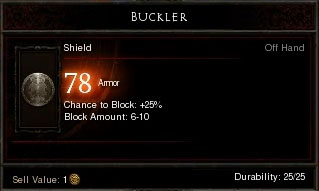 How will this play out strategically? It should make the damage over time more predictable. Rather than missing entirely with most of their hits, while occasionally landing huge blows, monsters will hit you steadily, allowing you to better judge how long until you’ll need to drink a potion or hit a health globe. Conversely, you’ll be able to accurately predict your damage rate against monsters as well, since their defense works the same as yours. And since you’ll be landing most of your hits, you’ll probably want critical damage and other effects stacked on top of your regular damage, since those will trigger constantly.

I think I like this change, conceptually. It will obviously take a lot more play testing to see just how it shakes out in practice, and what types of equipment or attacks are more or less useful than in D2. The biggest obvious loser (as we’ve known for some time) is the shield, since in D3 they have a % chance to block, and a set amount of damage absorption (stats vary by shield type). Thus a D3 shield is not the grossly overpowered “erase 75% of all physical damage” tool it was in D2. Which should, by extension, make two-handed

dual-wielding much more viable, since you won’t be giving up so much doing without a shield.