A fan argues for a more difficult game via stiff death penalties, and Bashiok rises to dispute him. How successfully? Judge for yourself.

Why new games have to be such “protective”? if u die, u die and lose everything. if someone in the doungeoun wants to kill u and get all ur stuff, it is ok. We are adult and we have the real life to feel protecred and safe in it. If I don’t want to be thrilled I only need to live my real life!

My point: no mercy for cheaters, and a “safe mode” for crying babies. But true men want to play it hardcore, I’m sure.

But it’s only a dream: blizzard have to make money and I’m almost out of its target audience!
Yes, I remember playing Diablo when I was 16. I’m not sure if I was a “man” then. … Sometimes I question if I’m one now… BUT THAT’S NEITHER HERE NOR THERE!

Anyway, I’m not sure being screwed out of experience and gold and items makes it a “man’s game”. A masochist’s game, for sure, but then I’m sure there are plenty of ladies who enjoy being punished too.

Ok, in closing, mechanics that punish players are contrary to our core company design philosophies, and so no, outside of you playing a Hardcore character, there will likely be no intentional mechanics in the game that will punish you.

Semi-related is that we’re still aiming for an ESRB rating of Mature.

wow, i didnt take it to this extent but…. they say gold will be valuable but…. if we dont lose any when we die…. um

That said, I don’t think we’ve made any final determinations on death penalties. Though I wouldn’t expect it to take anything away from the player. Gold, experience, etc.

Point being there are mechanics designed to punish players for good reason. Those should still exist.

Glad to hear you’re still thinking it through.

I don’t think death penalties need to edge into the ‘punishment’ definition (although I realize that’s a confusion of terms) to be worthwhile.

Making sure someone can’t endlessly throw themselves against monsters/die/repeat and eventually win is something we’d want to stop. To make the player take pause and realize they’re not going to get past them unless they straighten up and pay attention and play better, or take some extra measures to buff up, or simply come up with a different strategy, those are the types of death penalties that work. Those are the ones we like and that I’m talking about.

Taking gold away from people, or taking a full level of experience away, yeah, that’s a wake up call. It’s also the quickest way to get someone to uninstall the game. A very select few people will put up with something like that. It’s fine in Diablo II because gold has almost no use, but imagine if it did. You’d be encouraged through the mechanic to grind in easier areas where you’re sure you couldn’t die just so you could earn gold safely. That sounds terrible. Without a gold penalty you can play the content you want to play and meanwhile you’re finding items and amounts of gold that are relevant. That sounds like fun. 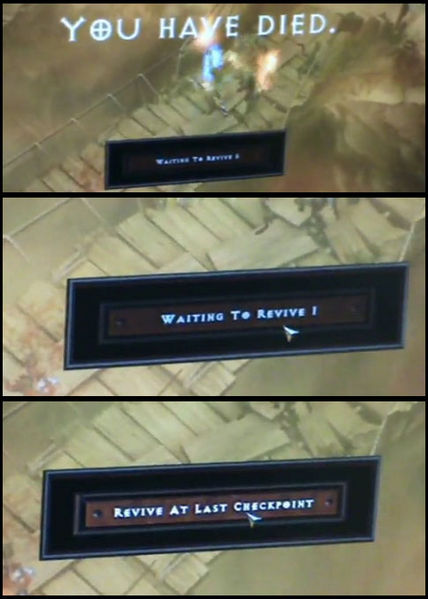 Some echoes of the sentiments seen in our recent Farewell old-schoolers forum thread, in these arguments. (The ones Bashiok is disagreeing with, I mean.) What do you guys think? Does a game such as D3 need to have some kind of death penalty? (See the

death article in the wiki for many more D3 team comments on the issue.)

This topic got kicked around in the 3rd installment of On the Drawing Board, and aside from much support for the concept of staying alive bonuses (something no one on the D3 team has ever shown any interest in), the general consensus of the comments was that some kind of death penalties were required to keep non-

Hardcore players honest. If death means nothing but a few seconds of delay (as is now the case in Diablo 3, where death is essentially a “teleport to last

checkpoint” effect) then that’s an encouragement for reckless, mindless, no co-op play, and

glass cannon builds. Why play with others; why bother with defensive stats and strategies; when you can more quickly rack up kills and items by playing in a full out offensive style? Especially since you can just “Zerg” bosses, throwing yourself at the enemy and subtracting his life in 10% or 15% increments while dying again and again?

The counter argument is to look at the differences between D2 and D3. Yes, zero death penalties and instant restarts without even a corpse to retrieve would be ridiculous in D2, as easy as the game is for well-equipped characters. But D3 isn’t D2. You don’t have life leech, you don’t have belts full of 16 full rejuv pots, and many of the aspects of

combat are different enough in D3 that the game won’t be as easy to race through as most of D2 is.

At least that’s what the devs keep telling us; since no one outside of Blizzard has played any of the higher level game, and the difficulty/balance of Nightmare and Hell still exist entirely as thought exercises even for the design team, we’ve no alternative other than to take that on faith. What do you think?