hardcore mode. The popular consensus amongst fans is that the choice should be available out of the gate.

Looking back to the old days of Diablo 2, this was originally a requirement for hardcore access as well. Only in a relatively recent patch did they give players the option to start hardcore without that normal prerequisite. For those of us who had gone through multiple accounts as hardcore players, it was a nuisance to continually run a character through normal on every alternate account.

This is the way it worked in Diablo II and we like it. We want players to give the game one play through to experience the story, the flow, the boss fights, and the baseline difficulty before risking a whole character on a single death. Players interested in Hardcore mode will have plenty of time for that. But we’re happy with it being a setting you have to unlock first.

Unlocking game modes has been a staple of gameplay achievements since the early stages of console/computer games. Diablo 3 seems an unlikely candidate for such a feature, though, as it is a popular mode of play that gains no benefit from its normal counterpart. While playing normal allows one to get accustomed to the game and storyline, there are many that wish to have the hardcore experience from the very beginning of the game. Diablo 3 is not a game like Castlevania, where Boss Rush Mode and the like require you to begin the game anew.

The only thing I can say in its defense is that it may be used as a “gambit” to entice new players to even notice that hardcore exists in the first place. When you get the “achievement unlocked: Hardcore Mode,” it may gain more recognition. But… if you’re hardcore, you already knew it existed… right?

I just realized blue is definitely not a HC player. I wonder if any of them even understand why we want this? I think women feel like this when they try to explain make-up to men. (most men)

You’re just on a whole different level and playing field, Zane. After years of pouring blood, sweat, and tears into what we believe will be an amazing gameplay experience, we just don’t understand where you’re coming from. We’ve spent all this time focusing on making an incredibly fun game with a lot of depth. And yet, as a development studio,

Thanks blizz ! I love it when you tell me what’s best for me!

I see a lot of people parroting this and find it a little silly. What do you think a game is? There are scores of predetermined parameters in which you have to play. We made the entire game from the ground up. In designing a game, we spend a good chunk of time deciding what’s best for players. There’s not much of a point in arguing this situation is any different.

The reality is, the moment you log into the game for the first time, you want access to a gameplay mode we think should be unlocked through completing the game on normal difficulty. We’re not telling you how to play or doing what we think is best for you.

We’re doing what we think is best for the game.

To be honest, I’m not really sure where the OP was coming from and I think that Zarhym’s response was adequate. The entire game is built upon parameters that Blizzard has created for the player interact with, so lamenting the fact that we’re “being told what to do” seems to be a rather moot position.  And really, there is no one person singled out by Blizzard with their design choices: whether you agree with the decision or not, Blizzard truly feels that it is best for the game. As to whether or not it actually is the best, we’ll see. While this decision is not a demand on how to play the game, the root of the matter, I feel, goes much deeper. It is homogenizing the first hours of gameplay for their entire audience that, in some cases, may alienate the hardcore base of players.

Personally, I’ve been a hardcore player for possibly a majority of the time I’ve spent with Diablo 2. At this point, I’m indifferent as to whether or not it will require a normal run-through simply due to the fact that I’ve been so used to the prerequisite. By the time the requirement was lifted, I had switched to Softcore PvP and didn’t experience the benefit. But that doesn’t mean the same for many. Hardcore is hardcore – there is no preamble. Your first play-through of the game sets the tone for the rest of your experience, and some people want to start it off playing all or nothing.

How do you all feel about a normal run-through being required for hardcore? It would seem that such a decision to unlock a mode would only affect a very small percentage of their players – and it is for this reason that I feel the requirement may not really be necessary or feel all that awesome once it unlocks.

Update from Flux: Since I was writing a post about this when Nizzy’s went live, I’m going to tack my already-written remarks here. 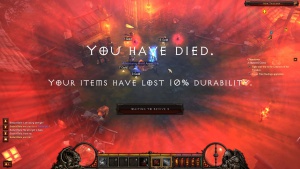 I’m probably wrong, but this is the first time I can remember “D2 did it that way” being used in defense of a feature, rather than as a reason to do something new and different? (Which quite often winds up evolving back to the D2 system, 2 years later.)

I am not going to play Hardcore first, largely since I need to rush through and get screenshots and info to post news and wiki updates, etc. But if I did not have that responsibility, and had the leisure time and patience to reroll and suffer, I think it would be so awesome to do HC my first time through. Imagine meeting every new boss and quest challenge when battling for the highest stakes? Seeing all the new content while having to play on your toes and at your highest concentration!

Hardcore players want to play the game hardcore. Right from the start. Not sleep through the god-mode walkthrough that is Normal difficulty level, ruining all the surprises and new content. I can easily see HC players getting a friend to rush them through normal, skipping as much of the content as possible so they can save the surprises for when they start playing for real, after navigating the “Normal-first” hoop Blizzard is forcing us all to leap through.

While talking to friends about D3 lately, we’ve been using the (slightly awkward) neologism “MomShioked” to refer to the dozens of features (or removed features) in D3 that clearly owe their entire existence (or non-existence) to the “might possibly confuse a non-gaming casual” test that Blizzard keeps applying to D3’s design. Someone like say, Bashiok’s mom (a non-gamer Bashiok did once mention as providing *useful* D3 feedback).

I think “no HC from the start” is pretty much Exhibit A in the “MS’ed” category, as even in this post the CMs make no effort to defend it with any logic or reason. We brought this up in our two-part Hardcore podcast, and Xanth has written about it a few times, and we saw support for it in a recent vote, but it remains inexplicable to me. Why isn’t HC from the start an option? Is the fear that some noobs would click it by accident and then come crying to tech support really that crippling? Seriously, this isn’t that hard to fix. Include HC at the start but make players navigate to a submenu, include two or three very dire pop up warnings, etc. Problem solved. Problem Momshioked!