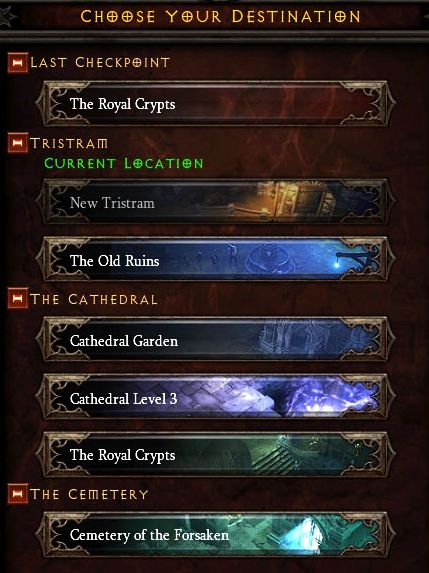 Bashiok and several of the not-Bashioks were busy in the B.net forums today, answering numerous questions, most related to the just-concluded open beta weekend. Most of them are pretty simple noob-type questions, but a few of them added some interesting detail.

The Waypoint system returns in Diablo III, but with some key differences. Most notably, there are a lot more than 8 waypoints per act, and long quests have several waypoints along the way, only the first of which is visible when you start a game. This is a feature designed to prevent boss rushing exploits; in D2 terms it would be as if you only got the Travincal waypoint when you started a game, and didn’t see the Durance 2 waypoint until you reached it.

Nothing in the game explains this (though our

Waypoints wiki article does), so new players were understandably confused as to why the waypoints they’d found last game were not visible next game. Bashiok didn’t exactly explain the mechanism, but he did at least offer some consoling game fiction.

One way to think of it is that waypoints are not something your character remembers from game to game, they’re discovered in each game based on your progression through the story. When you choose a previous quest it’s like beginning a new game at that quest. If you want to jump to a later point you need to make or join a game that begins at that point.

Another new system is the one that grants

Mighty Blow bonuses. Mighty Blows are multiple kills from a single attack or several attacks blowing up at the same time, while Killing Sprees/Massacres are timer-based; you just have to keep dealing damage (not necessarily killing) constantly, without any pauses, and all your kills during that time will add up.

The system requires some practice to get used to; initially you tend to go in spurts against big packs and get several 10 or 12 kill bonuses. With practice you can learn to pace yourself during the

Jar of Souls is much easier, since there are just so many targets), turning them into one long 40 or 50 kill streak. It does take some practice and skill though, and new players have trouble with it.

It needs to last longer or detect you are in combat or something. I am constantly having it go off in the middle of combat while fighting on big group when I am clearly still in combat 😐 Very annoying
The game doesn’t have a concept of ‘in-combat’. The countdown begins from kill to kill, so if it’s falling off and you’re being awarded with a streak then you took too long to kill the next enemy. The bonuses are certainly nice, and fun to see how high you can get them, but they’re fairly minimal and so I wouldn’t stress about feeling like you need to always have a streak running.

Click through for more Blue wisdom on elemental weapon effects and quest leechers in party play.

Elemental effects on weapons are nifty, but not real visually impressive in the beta. Can we expect more later? Yes, actually.

A sword dropped that has lightning on it. The animation was… well passible.

But then a weapon with fire and another weapon with poison dropped. All you see on them are a light red glow and a light green glow.

I know the graphics are not the best.. but come on.. There are games made 10 years ago that have elemental animations on their items. Whats with the horrible lack of Animation?

#2 by Bashiok @ 15:11:00 22-Apr-2012 Original Post
They’re low level items with low level elemental effects on them. It wouldn’t be very awesome when you find a super insane weapon later and the elemental effect looks the same as a level 10 item, would it? 🙂

Nice news there. We were all pulling for gradually-increasing magnitude in the skill effect animations, back when there were skill points and skill rune levels in the game. Those seem to be gone with their features, but at least we can look forward to massive flaming hammers.

One “feature” that’s definitely carrying over from D2 to D3 is the issue of douche-nozzles in public games. The removal of the PK switch and ninja looting plucked the two most powerful arrows from their quiver, but there will always remain some ways to exploit and annoy. There’s no way to have any privacy in D3 since anyone in the game can always warp directly to your location via your banner in town. Moreover, the quest system provides that pop up option to everyone to come and join in, whether they’ve earned their place or not.

I don’t know if they only have that option for the beta or not.. But I found out that you can sit out in town and wait till they reach King Leoric and then you just press accept and you get teleported to fight the boss..

Now the idea is nice that if you are fighting somewhere else and they found the entrance first.. but I can only imagine how people can abuse it by being “afk” in the game and you can’t kick em out.. so you do everything and then you reach the boss and they join in and get the loot

You can see the potential “bot abuse” or 1 main character is playing and 3 other toons wait till boss, join, loot great char, sell in AH.

Today I was playing a game with 3 other people… they stayed in new tristram the whole time.. when i reached King Leroic, they joined in.. talk about a p#%@ off

Probably not too much of an issue. Due to how randomized the item drops are, and our specific design to not make boss kills the most lucrative (without the Nephalem Valor buff) it wouldn’t really make sense to sit in town and wait for a boss kill. Not to mention in later difficulties it’s unlikely the group would be able to make it to the boss without sticking together.

I think it would solve the problem if the banner isn’t freely clickable by any player.. meaning the players playing must press the G button to drop a banner so someone can join them.. that way if they know the guy is just hanging around for quest related or boss related events, one can stop him from joining unless he runs there.

I don’t know if Inferno can be done by 3 players in a 4 player game, but i’m assuming nightmare and maybe hell can be. I guess the best way to find out if it really does matter or not is If Blizzard employees tests it out in higher difficulty and see if mooching can be abused or not.
The game at all times should be encouraging co-operative play. If for some reason it’s not doing that, such as it being lucrative for someone to sit in town and wait, then we need to solve that problem. The correct solution is unlikely to give players specific abilities to dissuade or control griefing. Ideally griefing just shouldn’t be possible in the first place.

I had people doing the exact same thing. They wait until you get to an area they can port to then join. They sit in town and let you do all the work then mooch. I really was hoping for a kick option but I won’t be needing it too much because I have people to play with already. One game I was in a person waited over 30 minutes in town then we got to SK and he teleported in for the boss.
Right now I’m sure there are a lot of people that think boss kills have the best drops because they’ve been trained to think that way from other games. They’ll learn they’re actually missing out on better drop opportunities.

These features are great if you’re playing with friends; no more asking for portals, no more pausing to start a quest since you’re waiting for someone to get there, etc. The the other side of the coin is that you can’t unparty in D3, and since you don’t get any exp or increased drop rewards for playing in an MP game, people in the game who aren’t participating are nothing but weights around your neck.

As Bashoik confirmed (by not mentioning it) there aren’t any tech fixes or changes coming to the party system, so what we see in the game now is what we’ll have upon launch. So the fix is a social engineering work around; choose your companions in adventure carefully, or just resign yourself to being leeched from, sometimes. Happily, you can always leave the game and enjoy D3’s handy quest continuation system when you start a new game at the last checkpoint.