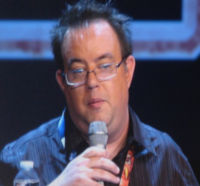 WorldofWar.net have posted the WoW-side of the BlizzCon press Q&A session with

Jay Wilson and J Allen Brack, and if you are interested in WoW at all you should check it out. For us, I have transcribed my notes from the session, with the Diablo 3 questions to Jay, which you can read after the jump. The Q&A session covers topics such as

shrines, kill combo bonuses, and the

Don’t miss out on this one!

Guilds are basically needed in Diablo 3 in order to help you if you get killed, and to give you support when playing, what will be done in Diablo 3 to make guilds needed?
A: We have not looked into making guilds yet as the game is so early in development, but we have some great ideas for encouraging people to make guilds. We want to avoid doing things that can ruin things for non-guilded players. We would love to do a lot of things that play into guilds.

Q: What is the circle in the middle of the inventory screen?
A: It’s a function we call the

Talisman. It might not have a function in this build, I can’t remember, but it’s all about character customisation. It’s a feature that is not set in stone, so it might change drastically, or even be removed.

Q: Will there be distinct

class roles to fill, like in WoW?
A: We want a well balanced crew, where they are able to hold their own. Not really roles, but there will be good to have some of the special abilities around.

Q: Trading is a big thing in Diablo 2, how will you handle this in D3?
A: We haven’t decided this so much yet, people trade when they get items in games, but trading is definitely something that will have a heavy focus in Diablo 3.

Q: The Automated Stat Assignment, is this a permanent change?
A: Yes, it’s a definite change. The only purpose of the stat assignment in Diablo 2 was to break a character. You level up and realise you did things wrong and had to start over. We decided to remove it and add other customisation options. It works similar as to WoW.

Q: I have never played Diablo 2 online, and Diablo 3 is obviously focused on online play, is it a lot like an MMO?
A: There are some similarities, but it is not an MMO. You can play Diablo 3 besides an MMO, as it’s nothing like WoW, and you can log in to just play a few minutes, where WoW requires more dedication. We’re not worried at all that WoW and Diablo 3 will overlap.

Q: In Diablo 2 your only way to

respec would be to

reroll. It got a bit better with the synergy bonuses on skills. What are you doing to improve the

skill system?
A: One thing that we have changed is that these synergies is their own skills. A lot of new passive skills are added and the tree is more split up. You can move down your skill tree without wasting points. There is also more room for specialization to grow more individual. We also now have a respec system, so you don’t have to reroll to get other skills.

Q: Is four people multiplayer games set in stone?
A: It grows more and more set all the time. In Diablo 2, eight player games are very uncommon, and they wouldn’t be in the same party or the like and we have just found that it’s not as fun as with four people. We have the ability to set any number we want, but four seems to work out very well.

Q: Playing Diablo III you come to a place where it says “

Checkpoint Reached”. Is this the same as a

Waypoint?
A: This is more of an improvement on the old system, a checkpoint is a way to save progress. A difference is that you can’t teleport away from them, but you can jump TO any checkpoint. It’s easier, and in Diablo II you might run around for ages looking for the waypoint.

Q: When I played online with a friend, I had the problem that I did a lot of damage, but my friend got the killing blow and all the experience, is there a similar problem with Diablo 3?
A: It actually splits experience if you are in a

party, so just join a party.

Q: Other companies use some of your gaming ideas in their games, and you obviously use others. Can you give me an example of an idea you found elsewhere and took to your development.
A:

Achievement system. Not really a special developer, for all types of games has this, but a bit like X-Box Live.

Q: Will there be

shrines in Diablo 3?
A: We have not decided about it. We have ideas for shrines. The things is that only two shrines were actually interesting to the player: Experience Shrines and Monster Shrines. Other shrines where like “nah”. We want to bring some system in with this functionality. This is where the combo exp bonus comes from. It’s not replacing shrines, but it’s playing in to it.

Q: Is there any caps on the Killing Spree combo?
A: Yes, there is a maximum combination combo. It’s related to your level but I don’t think anyone can actually get it. It has a theoretical limit, but you are not likely to reach it.

Deckard Cain, is the new one the same actor? He was a good point for comic relief in Diablo, will he still do that?
A: Of course it’s the same actor,

Michael Gough, and we couldn’t dream of replacing him. Yes, it’s the same actor, but Cain has grown a bit more somber. 20 years have past, where he has been trying to warn people about this war, and he has gotten increasingly desperate.

Q: Will there be any roleplaying aspects to Diablo 3, like changing faces or skin colour?
A: In a previous build you could change face and skin colour, but the problem was that when you entered the game, you couldn’t really tell the difference. You spent perhaps 10 minutes picking your character, and you wouldn’t see anything of him. Another problem was armour would quickly hide it, and it also slowed down the game to go through that process, so we decided to remove it. It goes in line with the philosophy of making a fast game as well. you come in to the game, pick your class and go!

potions changed, wouldn’t this give potion an inflated value?
A: We work on

PvP a lot. We talk a lot about it, but we haven’t decided on much yet. You can certainly use potions, you just can’t use them a lot. They don’t have a great impact on the game. In Diablo 2, potions actually ruined the game, as you efficiently get unlimited health and mana. The person that use up their potions first lose.

Q: Will there be a

Stash in Diablo 3?
A: Yes! Bigger as well, and it grows in size.

Q: Will there be another

Bashiok: Yes, it was actually us). Well, then there are definitely the possibility.

Q: Talking about guilds, will there be like a Guild Stash?
A: We haven’t started on that type of things yet.

Battle.net isn’t done yet. We’ve had some small small talks about it, that’s it.

Q: Will you push Diablo 3 as an eSport game?
A: It will definitely have PvP, but look at how

StarCraft II is designed with this in mind, it’s so important for StarCraft. We would have to make quite a few compromises with the game to make

eSport a cornerstone of Diablo 3. We will make

PvP bigger than in Diablo 2, but our goal is not to take it to the progamer level.