Blizzard has released some more information about watching BlizzCon via the DirectTV satellite service. 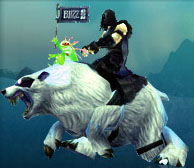 DIRECTV BlizzCon Package Availability
DIRECTV has just announced further details for their pay per view package of BlizzCon coverage, and that the special promotion offering it free with a new subscription is now open. New DIRECTV subscribers in the US who sign up for DIRECTV by September 30 through =http://www.blizzard.directv.comhttp://www.blizzard.directv.com[/URL] or 800-728-9375 will receive the package for free, while existing DIRECTV customers will be able to order it for $39.95 beginning on September 28. For full details, check out the official announcement, or head over to the BlizzCon site.

It’s $40 for 16 hours of coverage from the two days, but that’s a lot cheaper travel expenses and hotel and buying a ticket, even if they weren’t long since sold out. As an added incentive, Blizzard’s offering an exclusive in-game WoW pet to people who order the package. You can has polar bear!