Demon Hunter was the weakest class. (Just as most agree that the Witch Doctor was the strongest. Opinions differ on the Barb, Monk, and Wizard.) Both The Eliminator and Wolfpaq were down on the Demon Hunter during our during our podcast earlier this week, but why? What were players doing wrong with the DH in the Arena demo, or was the problem with the character build itself? (Which players could not adjust.)

This report should go some distance towards answering that question. It’s by The Eliminator, and he runs down all of the Demon Hunter’s skills and runes, talks about what they did right and wrong, and offers suggestions to improve the build for the future. (Most of which involve MOAR DMG PLZ!)

Here’s the introduction; click through for the full report, and his improved Demon Hunter PVP build.

The class that most thought was the weakest was the Demon Hunter. Although she did the least amount of damage she was extremely good a escaping danger. I didn’t die a whole lot as the DH because I always tried to keep enough

Vault to safety, to use

Smoke Screen, or even

Evasive Fire to retreat out of combat. Using mobility was where the Demon Hunter shone. If you paid attention, you could almost always get out of trouble.

Where the DH was weak was her damage output. I think that was mainly because the build itself could have been better. Some classes could get anywhere from 4-6k damage with

critical hits, while the Demon Hunter was lucky to get a 1k hit, and even that only worked when the target was already weakened by being hit by a Wizard’s

runestones used in the PvP demo. 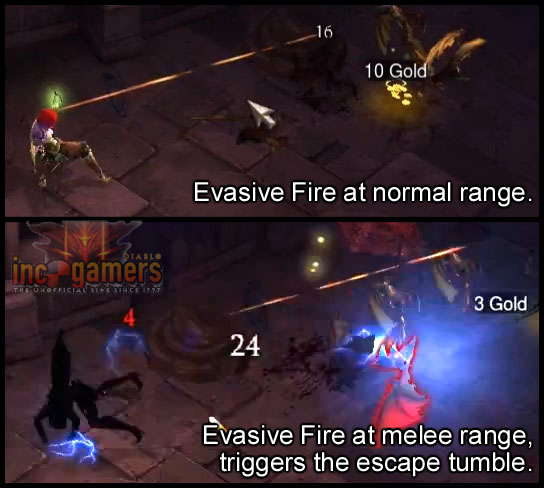 Hatred Generator it was a skill I used a lot. This skill did about 200-400 on a normal hit and 500-750 for a crit (around 1k when someone was already debuffed by Frost Nova). The damage wasn’t terrible because there was no cooldown the hits were just about instant (unlike most projectile attacks of the other classes) You could pop off 7 hits with this skill in about 2 seconds, which works out to an average of around 1575 damage/sec.

I used this skill to frustrate Monks and Barbs, because every time they got into melee range, the backflip portion of the skill would kick in. One or two backflips was all I needed to get way from a Barb because both of his distance closer skills (

Leap Attack) had 10 second cooldowns. The Monk on the other hand was a test of how long they wanted to chase me until I had enough and used Smoke Screen to escape.

Evasive Fire is a descent skill, though the damage is a little on the weak side. If it did just a little more, it would be awesome. Would I wanted a different Hatred generator in the Demon Hunter’s build? Maybe

Hungering Arrow would have been better, because it could have been fired from behind cover, and since the shots could have homed in on enemies, and hit more than one target each. Furthermore, it has a higher damage potential with proper runestones.

I don’t know what it was with this skill but it just didn’t seem to slow targets down as much as it says it was. I guess it has to be the tiny 12 yard radius. The skill only slowed targets down for one to two strides. Comparing it to the effectiveness of the Witch Doctor’s

Grasp of the Dead it was a joke. Although Grasp of the Dead’s debuff was a lot less, its radius of effect was twice as big and it did damage over time. This skill would have been more useful if it was runed with any other rune besides Golden. They need to either make the trap radius bigger or when an enemy crosses the trap gives them a debuff that stays for a few seconds. 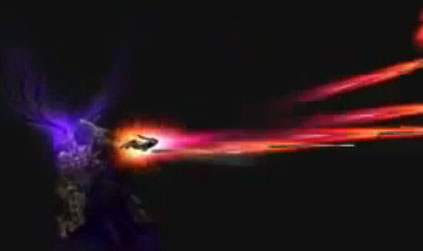 This was the only Hatred spender of the build, and although the skill looked cool it really lacked the punch it needed to be an effective skill. Hits with this skill averaged a measly 50-125 on normal hits and 100-200 crit. (Like I said earlier, they did a bit more if a target was debuffed by Frost Nova) Although the projectiles from this hit very rapidly, around 10 per second, perhaps a third of them were usually blocked or dodged. Considering that, only 7 hits per second for about 100 per hit = 700 damage a second, which was not sufficient.

The homing missiles that Fire Support gave you had very little added bonus. In fact the skill would have been much better off with the Alabaster or Indigo rune, for this build. The only time this skill came into its own was when you used

Shadow Power with it. Would I have picked another skill instead, maybe but if I did most of the skills would have had to be changed as well. This skill needs more DPS.

This skill was great for getting way from danger. Two uses of this skill put you on the other side of the map. So long as you didn’t put yourself in a corner or run into one of the high walls, you were safe and free to try to find a

health globe. When using this skill the Demon Hunter could cross over enemy traps and not be slowed at all. If a Barb tried to use his Ancient Spear to pull you in you could just Vault and it wouldn’t hit you. Vault could also be used to chase down enemies that were low on health, which I did do a few times. The skill was a little redundant with “Tumble” (Evasive Fire) but it still came in handy. If I was making this build I probably would have taken Vault and left out Evasive Fire.

This skill increased the damage output, and was also the only source of healing for the Demon Hunter. Without this skill Rapid Fire would not have been worth using. The life regen from this skill was not as good as it could have been, had the Demon Hunter had bigger DPS skills.

I will say this, the skill looks fantastic and even though the damage addition was marginal, it just was a fun skill to have going. It came with psychological benefits as well, since other players would see the Demon Hunter’s appearance transform and run, expecting attacks as dangerous as those the Wizard dished out in

Archon form. Sadly, that was not the case.

For this build “Blood Moon” was the only way to go. If you used this skill with Smoke Screen and shot up a few targets with Evasive Fire you could heal yourself and deal damage while completely invisible to the enemy.

One of these best escape skills in PvP. Not only did this skill break the Demon Hunter out of any

crowd control debuff, but you could attack for the duration of the skill while remaining invisible. The mistake most players made was when they used it with Rapid Fire, since the stream of glowing projectiles gave away their location. Better was to use Evasive Fire, since it did not show your location.

With no cooldown the Demon Hunter could use this skill repeatedly, to remain invisible for an extended period. This was the DH best skill of this build. If this build had Impale, Evasive Fire and this skill, the reactions to the class would have been much different.

Demon Hunter passives
Unfortunately I don’t remember the Passives so I can’t talk about what impact they might have had on the build. That’s what I get for playing the class first and only one time.

The Demon Hunter PvP build at Blizzcon was high on survivability and movement and low on damage. I have to question most of this build though. Why so many discipline skills? Why not have one less and have one more DPS skill? Even if the runes were changed the Demon Hunter would have had a better build. In the end the class just didn’t do what you would want in a PvP build… big damage, of course. I see potential in the class and that’s good. I can’t wait to get my hands on the class and make some bad ass assassin that shoots from the shadows and everyone wonders where death is coming from.

Here’s how the Demon Hunter was built in the demo, as best I can remember.
My PvP build would look like this. The Assassin.