Our first hands-on fan report from Blizzcon sets the bar pretty high. Not only did Blascid provide a great write up of his play experiences, but he even managed to speak with Diablo III Game Director

Jay Wilson one on one, and a shared their conversation in his report. 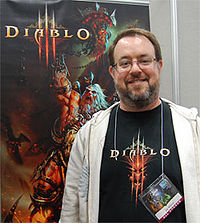 Don’t let this one put you off; you don’t need to include a developer interview to make your play experience interesting to others. If you played the game at Blizzcon, we want to hear what you thought. Just write about the class you played in PvM or the Arena and let us know what you liked or didn’t, what seemed hard or easy, did you fight a nasty boss, how did it compare to D2, etc. You can post yours in the forum, or , like Blascid did. I’ll do some typo/grammar fixing it needed, add useful links and some images, and post them in the main page news, one per day, for as long as they last.

Here’s a quote from Blascid’s report:

As I was leaving BlizzCon last night, I was lucky enough to run into Jay Wilson walking around in the lobby of the Convention Center.

We talked for about twenty minutes. He is super cool, easy to talk to, and very down to earth. He said when Blizzard was pursuing him to become a developer for the company; (at first he did not say yes) it was going to BlizzCon that changed his mind because of how humble the whole Blizzard team was. He continued with something similar to “Now, if they would have told me before hand that I was going to be working on Diablo 3, I would have taken them up on their offer sooner, ‘Where are the papers I need to sign?’” He told me that when he first got Diablo 2 he bought a plane ticket for his wife,