Another Blizzcon attendee report today, from Kunzaito. He gives an interesting report about the show, notes the lack of Diablo stuff compared to WoW and SC stuff, reviews the Tenacious-D concert, and of course talks about the Diablo III PvM demo as well, with good, first hand info on four of the characters. Here’s a quote, click through to read the whole thing, and ask questions in comments; the author said he’d be happy to reply on specific points.

I played extensively with four of the five classes. The Witch Doctor is not really my cup of tea, so I did not play with him, nor did I play PVP. Here are my recaps of each character:

Demon Hunter – Had to try her first, didn’t I? I didn’t play too much bowazon in D2, but I loved the way this gal played. Punchy and powerful, with a useful movement skill. At one point I encountered a tough boss with the property Vortex, which kept sucking me into melee range. It was a very satisfying and tactical fight. When I leveled, up, I took

Multishot, which was fantastic. Reminded me a bit of the spread gun in Contra in terms of awesome factor.

I know a lot of other readers were at Blizzcon, and I’ve heard from a few guys to the tune of, “I’ll write up my observations pretty soon.” Soon = now! Fans are waiting to hear what you thought.You don’t have to review the whole show or interview Jay Wilson, just write about what you thought of the demo, if you played PvP or PvM, which chars, etc. Read some past Hands-On reports from fans at gaming shows, if you want inspiration.

Post it in the forums, PM or , and I’ll add some links and images and do some grammar editing if need be, and fame and fortune will fall upon you! (Well, fame at least. Internet fame. Diablo fansite fame.) And yes, I’ll be writing up my own demo observations in more coherent form, rather than just sprinkling them around in the forums and misc news posts.

I was lucky enough to attend BlizzCon both this year and last. So I have to admit that I was absolutely comparing this experience to last year’s right from the start. And you know what? It did not disappoint.

Like everyone else, I was a little worried when they revealed the schedule and it contained a paltry 2 panels and a Q&A, compared to vastly more for the other game worlds. But, happily, as you all know by now, true to Bashiok’s assertions this was a definite case of quality over quantity. But I’m getting ahead of myself!

I picked up my badges and goodie bags the morning of the show. Like last year, a very smooth process. The bag was rather disappointing; the main item was better than last year, but overall there was very little in there, not even a bunch of those “stop by our booth and win a prize!” cards. Not the best start…

The line to get in was shorter than last year, for some reason. I got in line barely half an hour before doors opened but was much further ahead than I was last year having arrived 2 hours early! Having learned something from last year, Blizz smartly allowed an hour from doors-open to the opening ceremony so everyone could get in – last year I barely made it in time and there were many others behind me.

Overall, things were laid out much the same as last year in terms of the halls. A lot of the booths, fun stuff, and other content was the same as last year, just shuffled around a bit. One thing that stands out to me is that, at this point they have like 4 Warcraft-inspired statues, and 2 Starcraft inspired ones, but exactly 0 from Diablo. Alas, we’ll see this theme played out a lot.

One big change was that they set up the main hall with the stage on the long part of the perimeter. I didn’t really like this, the wing areas felt VERY removed from the main area. The opening ceremony was pretty good, though Chris Metzen’s “Geek is” shtick went on WAY too long, which ended up inadvertantly affecting the first Diablo panel because the ceremony ended late. However, the demon hunter reveal was awesome, though I was shocked that D3 had the only new info released this year.

That ended up affecting the entirety of the convention, actually. Whereas last year there were many times when I could play the demo, then cycle back around and immediately play again minutes later, this year the wait line wrapped around all four sides of the demo area at all times. 30-45 minute waits were de rigeur. So I got far less play time on what was a cooler and much more content-rich demo. I blame this on the fact that everyone’s been playing SC2 and WoWCat beta for awhile now, and they had nothing really new to offer.

But that brings us to what you really want to know about – the demo! I loved last year’s version, my first hands-on with D3. It was visually amazing, all the characters were fun, and especially the monk was a demon killing machine. So I had high expectations this year, and they were surpassed.

Surprisingly to me, ALL of the new features they revealed or expanded on in the first panel were playable in the demo. Very impressive. This demo was MUCH bigger than last years, and had a definite goal if you really strove for it (I never made it), as well as 3 playable levels. It was set in a castle of

Leoric‘s, which, to me, was extremely reminiscent of the concept art we’ve seen of a burning tower.

I played extensively with four of the five classes. The Witch Doctor is not really my cup of tea, so I did not play with him, nor did I play PVP. Here are my recaps of each character:

Demon Hunter – Had to try her first, didn’t I? I didn’t play too much bowazon in D2, but I loved the way this gal played. Punchy and powerful, with a useful movement skill. At one point I encountered a tough boss with the property Vortex, which kept sucking me into melee range. It was a very satisfying and tactical fight. When I leveled, up, I took

Multishot, which was fantastic. Reminded me a bit of the spread gun in Contra in terms of awesome factor.

Barbarian – The facial changes for the female barb were in effect on the selection screen, she looks great. I could see the male had changed too, but it was much more subtle, I couldn’t really even tell you how. Maybe slightly younger? The female barb in-game you could tell the difference as well, though it was barely noticeable at that resolution. She was rather fun and familiar to play, but nothing else remarkable to report here. 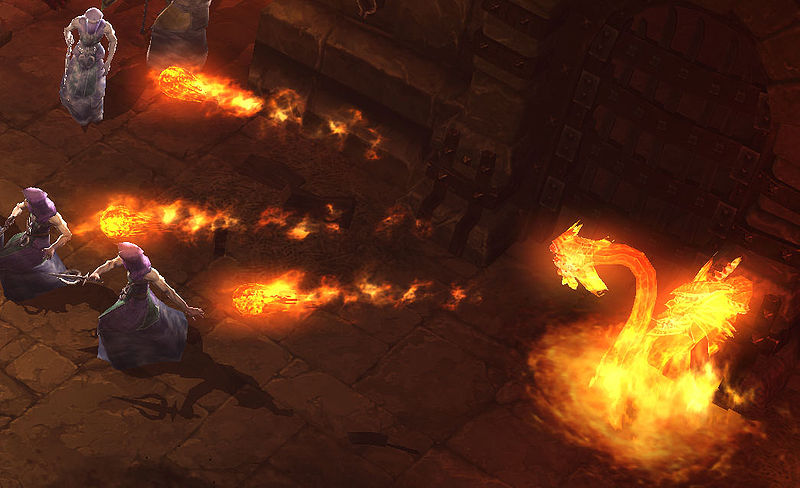 Wizard – This was my most successful play through. I had a LOT more fun with her than I expected to, not usually being a ranged fan. I found my only rune in this playthrough – an

Indigo rune, which I popped into my newly-chosen

Hydra skill. Hydras are great in this game, and the lightning mod made a huge difference. I also found two vials of white dye, which made a very cool and noticeable change in my gear.

Arcane Power, her resource, played basically like mana and was never an issue. I made it the furthest here, to the third level. Just like last year with the monk and Charge-up + Exploding Palm + 7-sided strike, I found that the wizard had a very satisfying combo here:

Hydras to mop it up.

Monk – The monk was much toned down in this demo, lacking access to all of her best skills from last year. Still quite viable and fun, but I ended up taking a damage aura as my level-up skill and just spamming

Spirit, was a bit frustrating to build and maintain, since it builds slowly and only through landed charge-up blows. This was my final play-through, just before the hall closed on the second day. I was unlucky here – though they weren’t letting anyone else in at this point, my game monitor made my group get up and leave IMMEDIATELY upon our time running out, whereas the other monitors let their groups just hang out and play until closing a half hour later. A bit of a bummer, as I would have loved to have the time to really look at everything.

Some stray notes: drops seemed toned down from last year, I only found one rare item in all my play, and no uniques/sets/etc. Though the talisman was enabled and you started with charms by default, I never found any. I only found the one rune. Though traits were enabled, I never managed to level up twice to get a trait point. I played with salvaging a bit to see the types of crafting materials; they were the expected types of things.

On the second day, I attended the second panel, the Q&A. I got in questions at both! Paraphrased, they were: