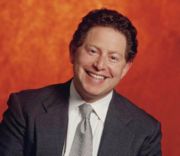 Activision/Blizzard (ATVI) CEO Robert Kotick spoke at the Deutsche Bank Securities Technology Conference this afternoon in San Francisco, and made comments that have been widely-reported around the internet. Most of the coverage is hitting on his remarks about future Guitar Hero type games possibly going console-less, which might be a serious plan, or might be more posturing in the ongoing struggle between the music labels, console makers, and software providers.

Of more interest to we Diablo and Blizzard fans are some of Kotick’s other remarks today. As you can see in the thread that brought this news to my attention, he makes some very developer-unfriendly, profit-first remarks that seem antithetical to the entire “when it’s done” philosophy of Blizzard game development. A quote from the Gamespot writeup of the event, since I can’t (yet) find a full transcript online.

When he wasn’t promoting the company’s games or technology, Kotick was celebrating its laserlike focus on the bottom line. He pointed to changes he implemented in the past as being particularly beneficial, such as designing the employee incentive program so it “really rewards profit and nothing else.”

He later added, “We have a real culture of thrift. The goal that I had in bringing a lot of the packaged goods folks into Activision about 10 years ago was to take all the fun out of making video games.”

If that sounds like it would create a corporate culture that isn’t all sunshine and hugs, then it’s “mission accomplished” for Kotick. The executive said that he has tried to instill into the company culture “skepticism, pessimism, and fear” of the global economic downturn, adding, “We are very good at keeping people focused on the deep depression.”

Keep in mind that Kotick was talking to investors at this event, and trying to sound in touch with the current recessionary economic realities. And we’ve also been told repeatedly that Blizzard is a separate entity and that there’s no corporate interference from their Activision owners/partners. Still, you have to imagine it was a fairly painful conversation when the Blizzard heads told Kotick and his accountants that Starcraft 2 was being delayed six months? I’m also feeling some sympathy for the poor game designers at Activision, who have to try to be creative and work long hours under the dark cloud of this kind of management pressure and corporate culture.

In related news, Mr, Kotick has recently been demonstrating his stated commitment to rewarding profit.

While some of Kotick’s options were due to expire next year, others weren’t due to expire until 2014 in his case and 2012 in Kelly’s. The stock sales took place at prices that were about 50% above their 52-week low. Activision didn’t respond to a request for comment.