Bashiok leapt into a forum thread asking whether the

Monk can use spears. No, he can’t, but that’s par for the course since he can’t use most other weapon types either.

Currently our list of weapons the monk class can use is one handed swords, polearms, combat staves, and fist weapons. That could potentially change, but its probably pretty likely those will be the weapons the monk can equip.

The flavor of the monk we’re working on now is a very strong connection between a small and focused group of weapon types, and the skills that use them.

has anyone seen skills that ONLY work with certain weapons?

Bashiok: I don’t think so… not yet…

As for the weapon-specific skills, the only statement on that I know of came in our interview with

Jay Wilson: We’re talking about that. One of the things we?ve talked about with the Monk is that a lot of his skills don?t really use his weapons. So he?s doing melee skills with his weapons almost holstered. For instance, Debilitating … I think it?s called

Crippling Wave now. We change them a lot and I get mixed up on the titles. Anyway, the Crippling Wave skill seems like it should be a staff skill. It?s kind of AoE, he does it and affects a lot of guys around him. So it?s a possibility that we?ll do skills and redefine them based on combat styles and have those styles have a weapon preference.

Check the Equipment section of the Monk page in the wiki for more Blizzard comments on this issue. 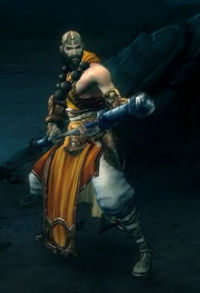 On the larger issue, what do you guys think about characters only being allowed to use a few weapon types in Diablo 3? It’s not just the Monk:

Witch Doctors could not use most of they heavy melee weapons (spears, polearms, axes, two-handed swords, etc) they found in the Blizzcon 2009 demo.

Barbarians look like the winners, since while they can’t use wands and short staffs and orbs, they don’t really want/need to. Forecasting, does this mean the

fifth character will only be able to use bows and other ranged weapons?

You could argue for this from realism, that ever-elusive aspect of a fantasy RPG. A character who has trained for a decade or more in certain forms and styles is an expert at those forms, but not necessarily skilled with other weapons. Monks are masters of open hand/fists, and long two-handed weapons that chop. Not spears (which are only used to stab with, in the Diablo universe) and not with shorter, heavier weapons. Letting the character use one-handed swords seems like a concession to utility, but I’ll bet he’s not very damaging with them.

On a more general game issue, restricting all the characters to a narrow range of weapons is going to encourage trading, or at least twinking, since every character will constantly find weapons they can’t use. It should also make characters more unified in their class design. On the downside, it might feel straitjacketed to only have a few weapon types open to a character?