Last evening, Bashiok hopped into a long thread full of confusion about adding skills from the tiers. He didn’t answer the main question of the thread, which as far as I know is a simple issue. You can use 7 of your character’s

skills, irrespective of their location on the skill tiers. For instance, you can’t use a skill from the 4th tier before Clvl 10, but once you reach a tier, you can use any or all of the skills from that tier, once you’ve got the skill points to enable them. You could

respec at Clvl 30 and have all 7 skills from just the top two tiers, if you so desired.

This wouldn’t be a wise strategy though, since higher level skills have higher

resource costs, longer cooldowns, that would basically amount to using a nuclear sledgehammer to swat a fly. As Bashiok explains:

Right, so for example, the three final skills of the barbarian tree all currently have 2 minute cooldowns. There are ways to augment those cooldowns slightly of course, but you’re still going to want a mix of skills that complement each other.

Barbarian skills (and all other char skills) have likely been rearranged a bit since last year’s BlizzCon demo, but as of then the Barbarian’s three skills from tier seven were:

Call of the Ancients — The only summoning skill of the Barbarian, this one allows him to summon the Ancients from Diablo II, who will briefly assist in battle.
* Description: Summons three ancient Barbarians; Talic, Korlic and Madawc, who inflict X% weapon damage. Lasts X seconds. 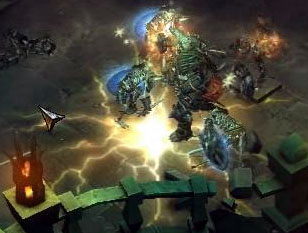 There was no information about skill cooldown times listed in that demo, and all these skills were much too high level to be tested out. But don’t Call of the Ancients and Wrath of the Berserker seem like really powerful abilities that should have lengthy cooldowns? They’re not the type of skill you’d be casting over and over again anyway. Earthquake, though, is one you’d like to use again and again,

Fury permitting. It must be really powerful, much bigger than

Ground Stomp (pictured to the right) or

Seismic Slam, with that long of a cooldown.

The key issue, as i see it, is that skills with long cooldowns can be much more powerful than skills with short cooldowns (for balance reasons). Thus Earthquake will (hopefully) be an absolutely devastating attack, the type that knocks down and stuns virtually every monster on the screen. Which is why you can only use it once in a while. We’ll just have to see how well the devs can balance this sort of thing; Earthquake obviously has to do a lot, and look amazing, to warrant a 120s cooldown.

And like Bashiok says, there are ways to lessen the cooldown time (item bonuses, traits, runestone effects, more skill points, etc), and there are plenty of other skills that you can use without any cooldowns at all. The strategy will be to mix them up appropriate, and I like the idea of preventing one-skill wonders and rewarding players for playing wisely and varying their attacks.

Update: A forum thread discussing this is already well into the 4th page of comments. From that thread, you might find this comparison/analysis of the likely cooldown times for the other class’ high level skills interesting. It seems likely that only the Monk will share the very lengthy cooldowns the Barb is encumbered with,since the tier 6-7 Wiz and WD skills all seem much faster castable.