Blizzard US has been quiet of late, (except for Bashiok’s five-word reply to this guy who humorously misspelled “Diablo” in his post title) but their EU counterparts, who aren’t busy planning for Blizzcon, have made a few forum posts of note.

Will Diablo III support dual monitors? Of course not, but let’s hear a CM explain that decision.

As things looks right now, the game will not support dual screen setups. We feel that the User Interface in Diablo III is fairly simple, so if the game could make use of two screens, the other screen would most likely not show anything incredibly useful that would truly benefit the gameplay. Of course, as always, this may be something that may change in the future, but right now we feel that it is not really needed.

For those people who do not have a widescreen monitor, the game will offer a letterbox option to compensate for the fact that widescreeen monitors currently display more of the game world.

stash, which is separate from the shared stash of Softcore characters, is re-confirmed.

Your character dies and you’ll lose all the equipment he’s wearing and whatever is on the inventory but you keep the items on the shared stash.

This is correct. HC characters will have their own, separate shared stash. However, items in the possession of any HC character at the time of death will be lost. 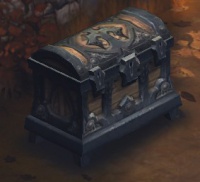 During our two-part (mega) podcast on all things Hardcore, I brought up the concept of stashing your HC character’s best gear before a really dangerous encounter, so it wouldn’t be lost if you died. Neither of the guests were entirely on board with that concept, (nor was I) but I thought it was worth discussion.

Imagine that some boss or area in D3 is superduper dangerous, ala Duriel’s lair in the slow-loading D2C. If you think there’s a good chance that your HC char is about to die, wouldn’t it make sense to stick your one or two fantastic items in your stash, so they won’t be lost? You’ve probably got a backup item that’s only slightly less useful but that’s 100x more common, and if switching to that item won’t cripple your survivability, it’s a logical decision. After all, really top items can be far more rare and difficult to replace than the character using them, especially with D3’s freespecs and quick level up design.

Or does muling your best item before the most dangerous fight just seem wrong? WRONG!