A fan voiced the general consensus that

runewords have ruined D2X, and got a nice reply from Bashiok:

The only reason these were implemented was to change things up, and add more playability to the already stagnant system that D2 had going.

That being said the only reason it was stagnant was because the game was what 6 years old at the time?

Still, that’s quite a long time in game-years. I mean, it *IS* an exciting feature. Build items that give you other class abilities? Hell yes I’m going to start playing again, that sounds AWESOME. But which abilities were given determined the long-term effects. Also, in their defense, they’re generally very difficult

runewords to create under normal circumstances. It’s fairly easy to justify creating some of these things with the idea that only a few people will be running around with these powers.

As it relates to

Diablo III, I wouldn’t say “never”, but providing a way to gain access to other class abilities is not something we’re looking to or planning on implementing in the foreseeable future. I think if at some point years after the game is released we need some way to spice things up, honestly it’s one fairly easy way to do it. I also think we have enough knowledge and know how and experience to be able to intelligently control such things. But I would also hope that those smarts could maybe help us find better ways to keep things interesting. 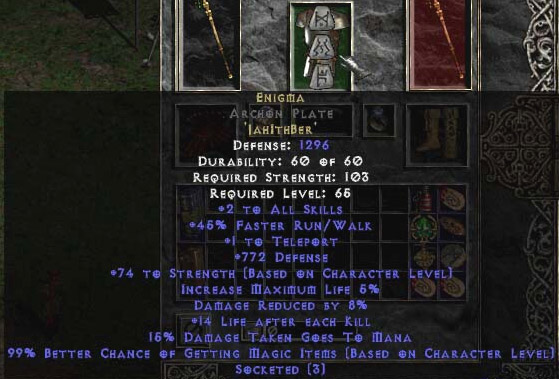 Removing such oskills, or at least the overpowered ones like

Enigma, was one of the top (unfulfilled) player requests for the v1.13 patch, and Bashiok’s comment here provides some insight into the reasoning of the Legacy Support Team. Clearly they think the oskills add variety and some freshness to an old game, and that’s worth the corruption of gameplay and the prevalant, “must have Enigma or you’re helpless at MF’ing or PvP” attitude on the realms these days.

On the larger issue going forward into D3, what do you guys think? Can items that grant other char’s skills be a useful game feature? Or will they always be 1) useful skills and thus overpowered and game-changing, or 2) minor skills and thus irrelevant and ignored? After all, hardly anyone bothered to carry SpellSteel or rare amulets just for their Teleport charges. It wasn’t until Enigma armor with unlimited Teleport (and other good mods) that the gameplay was radically altered.