Tis the season for annual “Best Of” lists and unsurprisingly, Diablo III is prominently featured. A collection, for your New Years’ reading pleasure. 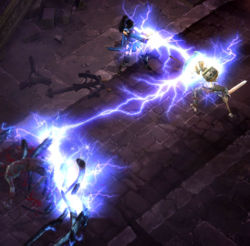 PC World’s list of the top 5 unorthodox games twice mentions Diablo 3 in the introduction, but then, as the title suggests, goes into detail about titles such as 1602 AD and Drakensang.

The LA Examiner runs down the bests of the year in gaming, and gives a nod to Diablo III in the Best Announcement category. Surprisingly, they cite not Blizzard’s massive Paris WWI debut, but the online announcement, created as it was by that tantalizing series of blizzard.com splash image.

But the boggest announcement was…Diablo 3! Any announcement that has people staying up until 3 a.m. to see a slowly revealing JPEG has to be a megaton of a bombshell and a sequel to a game that has influenced so many other titles is a megaton.

The Toledo Blade is hoping to see Starcraft II and Diablo III in 2009.  It looks like they’ll get half their wish, at least.

Digital Spy UK lists their most anticipated for every platform, including the PC. They say this of Diablo III:

Diablo III – Diablo III has been in development for some time now and fans will be praying for a 2009 release. Set in the familiar world of Sanctuary, it’s up to players to once again save it from extinction. With the return of the familiar isometric viewpoint, gamers will be happy to hear that the stunning 3D environments will sport a realistic physics engine, meaning that lots of destruction will ensue. The gaming experience will also be highly varied, thanks to a random level generator and class specific

The Toronto Globe and Mail broke their best of 2009 up into 5 pages, one per platform, and followed that with a page of What to watch for in 2009. The author’s a bit uninformed about the actual development progress of Diablo III, but his heart is in the right place.

Diablo III (Blizzard) We don’t know that this one is slated for 2009 with any certainty, but the highly polished screens and game videos Blizzard has released over the last half-year have made it seem as though the third entry in the world’s most popular dungeon crawler series could be shipped tomorrow. Here’s hoping.