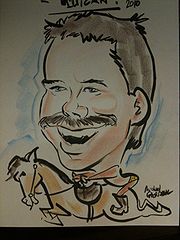 In the last week or so, Bashiok has started taking on an orphan: The StarCraft II official forums. He’s in great form and even taken the time to congratulate a fellow fan in the Diablo 3 boards on his birthday, contributing by posting a caricature of himself he has in his office.

For a guy who can be pretty harsh on the sarcasm, it’s very nice to see he also has some self-humility like this. Especially the detail of him in leopard coloured pants, humping a horse. Something he realized after the post was up:

I didn’t realize until just now that he drew me riding… well… not on the saddle… This won’t end well. Well don’t say I never did anything for you. Lost my job for your dumb birthday. AND posted a caricature of me looking like a crazy mullet-perv. I do love it though, for all those reasons.

Indeed, you have just been forever associated with your caricature, as it’s on the Bashiok wiki page!