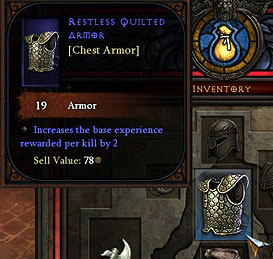 One common topic of debate in our forums is the issue of two-handed weapons. These were under utilized in Diablo 2 for two main reasons: For combat characters, shield blocking was so hugely useful that going with a lower damage sword/shield was usually better than a 2H weapon. For mages, the mods available on a 1H/shield were always better than the mods on just a staff or other 2H weapon. Fans have proposed *cough* various ways to encourage 2H weapon use in D3, with ideas including from more mods, special mods, higher level mods, inherent bonuses to 2H weapons, blocking on 2H weapons, and/or more sockets.

A fan brought up this issue in the B.net forums by suggesting blocking bonuses on 2H weapons. Bashiok’s reply summarized the basic issues involved, and let us know that the D3 Team…. is still debating the issue.

Funny enough right now two-handers on the barbarian are much stronger than dual-wielding because most of his skills are based on weapon damage and the game doesn’t add up the damage on both weapons while dual-wielding (yet). So actually we’re trying to make dual-wielding better right now, but, that of course means two-handers will probably then fall by the wayside and we’re back in Diablo II’s shoes. The witch doctor and wizard don’t really apply, the monk has specific skill support for his weapon choices, and the … *mumble mumble mumble*.

Off the top of Wyatt’s head there’s a few ways it could be addressed. One potential way would be to have passive skills that allow someone to specialize in two-handers or dual wielding, and we can stat and tweak those however we need to make them effective. We could also make special affixes that can only be rolled up by two-handers that overcome the innate issue of it only being one item.

Bottom line though is we intend for two handers to be as viable as any other weapon choice and we’ll do what we need to to make sure that happens.