Bashiok was back at it on Tuesday, with a short and a long reply to D3 questions asked in the Battle.net forums.

A fan asked if D3 will have more “demonic” stuff. Gory bodies on spears, blood lakes, burning crosses, and other good stuf. This was one of the topics I was most curious about before last year’s Blizzcon, and I was pleasantly surprised by just how violent and gruesome the game was. See the appropriate wiki page for many more details. Bashiok reassured the fellow, with a modicum of words.

We’re planning for a mature rating. It will be justified. 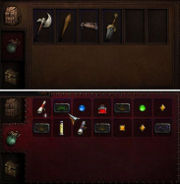 Just a few things off the top of my head regarding upgradable bags.

Upgrading storage size is a great reward, and can be much better than any incremental weapon/armor upgrade. (Kills/min could easily calculate out to be much greater without having to stop to clear inventory as much with a bag upgrade as compared to a damage increase from a weapon upgrade.)

Building off the last point, it helps add the sense of your character becoming more powerful and gaining more from the time spent playing.

Increasing the storage size over time/play experience is a great way to scale the player’s sense of the game’s complexity.

Beginning with a small and limited amount of space teaches the player early on that inventory management is an important part of playing the game – and sometimes generating income.

Making and keeping the player aware of their limitations can also help keep a better sense of structure and focus. Being overwhelmed is sometimes as detrimental to a play experience as being bored.

Also keep in mind that while we’re obviously dropping bag upgrades off of monsters now, we could choose any number of alternative ways to get them to the player. Or maybe a combination of different ways. Whatever, I just wouldn’t focus on the ‘how’ of them being delivered right now.