Bashiok made a few interesting posts on the issue of game difficulty and D3 boss encounters, in the forums today. Things started off with a fan pointing out that most of the features we’ve been told about add training wheels to the playing experience, and asking for some difficulty increases in D3. Bashiok replied with a story about random boss encounter difficulties: 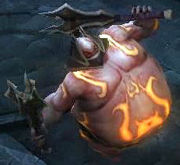 Depending on the random affixes a champion or rare enemy rolls up, they can be extremely challenging.

I’ve seen a barbarian spend (literally) five minutes trying to kill an “ice” skeleton mage with the “teleporter” stat. Meaning the mage is casting his normal ice spells which slow your character and he’s able to teleport and effectively kite you forever. And they do. The barbarian could only get close enough to do a couple hits before the mage would teleport and continue its barrage. But the barb never gave up and it became this self contained little event, completely random, but made it so much more than just plowing through enemies. When he finally defeated him we all cheered, it was an extremely gratifying little encounter.

Now of course if it was a wizard or witchdoctor with a lot of ranged attacks, maybe not such a big deal, but throw affixes like “thorns” and “vampiric” on a rare creature and again you’re looking at an involved fight.

So, yeah, the champions and rares truly are like mini boss fights if they roll some affixes that happen to specifically challenge your class or skill set.

Of course this sort of thing happened constantly in the early days of D2C, when bosses had lots more immunities and when the Teleport mod healed the boss each time it teleported. One or more of the High Council in Travincal or Durance 3 were frequently impossible to kill, when they spawned with troublesome mods and invariably wound up teleporting before a player could do enough damage to kill them. And this was all nerfed out in various D2X patches, primarily by greatly reducing the frequency and healing granted by the boss mod of Teleport.

The conversation continued when another fan (Grug, a regular poster here) added his tale of woe from Blizzcon:

When I played at Blizzcon 09, I wound up with an extra fast vampiric Lacuni huntress. God that was awful. I was a witch doctor, and first I had to sit on my hands and wait for it to kill my mongrels, because otherwise it would heal faster than I could hurt it by eating them. then I had to kite it little by little, tossing a skull of flame and taking a step back. Made me really mad because it took 5 minutes out of my demo time, and it was my last playthrough before the con closed. I didn’t even get to level up and try out Poison Toads 🙁

Bashiok: Haha, sorry about that then. Yeah vampiric with a witch doctor is especially trying because of the mongrel damage. I’ve seen that struggle as well. But if you happened to have picked up sacrifice you could have killed him probably in a shot or two because he wouldn’t have been able to leech any life out of the little guys before they exploded. So that’s one example of how specific classes can have fun (unless it cuts into your limited demo time) challenges, but you can overcome some of them if you happen to have a skill and know how and when to use it.

Another fan who will clearly never enjoy any success in Grad School, goes all min/max and asks what’s the point in fighting a random boss for 10 minutes when you can just run into the next room and kill fifty more monsters in the same amount of time. Bashiok says:

Well that’s not much of an issue, we could just give rares and champions a guaranteed drop of one or more items of a specific quality level every time they die. BOOM. Now you want to kill them every time. Not that it would be the case, but saying you have no incentive to kill them is like saying it’s all written in stone, which it isn’t.

If not, sure, you can run away from them if you like.