Bashiok made a nice post answering some fan concerns about the types of Bind on Equip/Bind on Pickup items in Diablo 3. 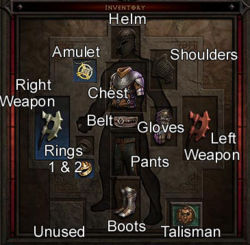 Yes, true, as Jay said at BlizzCon we are planning to have some amount of items that will bind to a character upon equipping them.

We absolutely won’t have items that bind when picked up, except for the obvious things like quest items and other character-specific items that wouldn’t/shouldn’t be tradable anyway.

That alone, I think, should dissuade the most severe concerns with binding items.

And before I go on just understand that while a lot of this is very stable in its concepts, the details aren’t final.

For Bind on Equip (BoE), the idea right now is that it would only be applied to “end game” items of specific quality levels. So to start, it’s not every item, and it’s not even every item above a certain level. For the BoE items that will exist, you can pick them up, if you don’t want it you can still trade it, or give it to another character, a friend, vendor it, whatever you like. But, if you make the commitment to keeping the item and equipping it, yes, it’s yours now.

The reasoning is that in reality we need a solid way to keep the economy stable at the end game. With items building up over a potentially infinite amount of time there’s no way to have any measure of control over worth of items. While an item may be the rarest and best in the game, over four or five years a stockpile has built up and those items are now commonplace and hold little value as compared to their rarity. The gold being earned by players stays the same or likely increases as players become more proficient at playing the game while they spend less as items lose their value. Gold value drops, and we’re skirting into a familiar cycle.

By ensuring we can rely on some amount of “consumption” of items, their relative worth stays high, the market is predictable and both sellers and buyers enjoy a stable marketplace for (hopefully) many years.

Diablo II has an inconsistent approach which is the somewhat stable Ladder economy, since it’s quite literally flushed out every so often. But it’s a very intrusive approach to a problem that could be solved through other means that don’t require making everyone start over.

As a quasi-aside: There’s an idea being thrown around, and this is really not guaranteed in any way, that some or potentially all items that are bound to you could be bound to your entire account. So if you yourself “own” an item from it being bound, you can trade it between all the characters on your account freely. Feed alts your old-but-still-very-nice items, etc. That’s just an idea, it may not take shape, but it’s a possibility.

Also consider that with respecs, old characters won’t become useless when a patch changes skill balance, so you’ll be able to keep playing the same character indefinitely, rather than having to retire them and lose the use of their BoE uber items when a patch nerfs their build.

Update: I thought Bashiok’s initial comment was fairly comprehensive, but thanks to questions from confused/nit picking fans, he’s been forced to elaborate in two additional posts.

1.For lack of a better example lets use D2 info. Would something like an assassins claw be BOP?
Or perhaps from your statement in D3 there may be items that drop only for certain classes?

2.Does that mean no potential ladder resets in D3?

Bashiok: 1. Hrm… well no, I didn’t mean class specific items. What I mean was… for the items that ARE bind on pickup you wouldn’t be surprised that they were.
2. I didn’t mean to indicate that but I’m not sure it’s a system we’re looking to carry forward. The leveling competition aspect is really cool (if it works), the dumping of one economy onto another… maybe not so much.[/blue]

Another guy had a bunch more questions about BoP, with examples from other games, etc. So Bashiok tried again.

I’ll be honest I skimmed this, sorry, but let me clarify again (I’m not doing this well today, huh?) and see if it helps.

No armor/weapons/equippable items will be Bind on Pickup unless they are rewarded by quests.
End-game items of specific quality types are currently planned to be Bind on Equip.

I confused it all by attempting to allude to other things just so I don’t get called on it later, and it really wasn’t necessary. Just follow the above two lines.

Let me try to clarify. As of the Blizzcon build, there was a special quest items inventory, on another tab from the main inventory. It holds items you must have for quests, and they are BoP, since if you drop them you can not complete the quests. They’re not items you equip, or if you do you’ll only use them for a short time until the quest is finished. Think of them like the Horadric Staff, or Khalim’s Will; you just can’t put them down or give them to another character.