Wrapping up the five classes from the Blizzcon 2011 Arena demo, here’s The Eliminator’s report on the Barbarian. The intro and first skill description are below; click through for the rest of the report, and easy navigation to the other class reports and podcast we’ve posted as part of our Blizzcon Arena demo coverage. 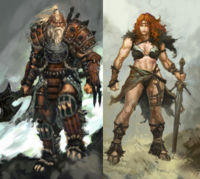 A brawler and a mauler. What is there to say about the

Barbarian that hasn’t been said? A lot when it comes to PvP. My top three characters in the Blizzcon 2011 Arena demo were definitely the Wizard, Witch Doctor, and the Barbarian, and not necessarily in that order. I truly enjoyed playing the Barb.

When you were in Wrath of the Berserker form other players feared you. When you used Ignore Pain most didn’t want to have anything to do with you. Whenever you Leap Attacked or used Ancient Spear, their sphincters clenched, and, whenever you used Hammer of the Ancients they died. That leaves Frenzy.

We have seen Frenzy quite a bit from the Beta, but that was against mobs of easy to squash monsters in large groups. When I used it in PvP I could never get more then a few stacks. This was due to the manner of PvP, you don’t just stand in one spot and have targets run at you waiting to be beat over the head by your weapon. A slow weapon doesn’t seem to work very well with Frenzy. Each hit from Frenzy dealt around 400 for a normal hit and around 800 for a crit.

Lets face it Frenzy is only there to build Fury. The bad thing is it didn’t do it very well. If they just wanted to have a Fury builder Bash with Golden runestone would have been better. If they picked Frenzy for damage then they should have given him two weapons so that he could build it up fast. With a one handed weapon Bash would have worked as well.

Hammer of the Ancients with Crimson Runestone: “Smash”

This was the Barbarian attack most players died to. The Barbarian could hit targets for 1k (without a crit). With a

critical hit the barb could land the biggest hit in the Blizzcon build. The characters in the demo had 9000-11000 hit points, so 6000 points of damage would turn any healthy player’s screen a bright red hue, and character with just 1/3rd of their health missing would find themselves waiting 2 seconds to respawn after a big crit.

I found myself spamming HotA till I was out of Fury. Since Fury was easy to come by in PvP with the amount of damage being thrown around (helped along by the passives) I never went to long before I could use HotA again. Hammer of the Ancients synergized very nicely with Wrath of the Berserker. WotB gives a damage increase to the barb’s Critical Hits, and HotA gives a increased chance to get a critical hit. My tactic was usually to Leap Attack, then Hammer them. If Leap attack was on cooldown then, I would use Ancient Spear then Hammer them. 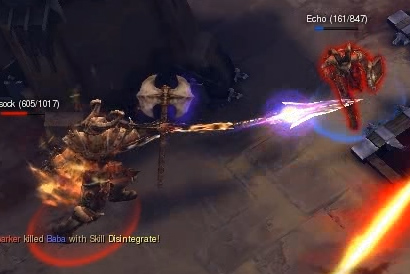 As OP this runestone and skill combo sounds it had its flaws. Some Classes could easily get out of its way. (namely the DH and Monk) Most of the time you would only pull in one character. That was because, most players didn’t stand close to each other. The arena had knee high walls that gave your character line of site but when you went to use Ancient Spear to pull them to you on the other side the wall would protect the enemy.

Where Ancient Spear was useful was when enemies were low on health and where trying to escape. I would pull them back with the Spear then HotA them till they died. As with most crowed control skills any kind of damage is just an added bonus. It wasn’t much damage but any little bit can be a killing blow. I never tried using the Spear on a melee ranged target, but from the vids I have seen it looks like a melee range character will be hit with all the spears. What I couldn’t tell from the vids was if the enemy in melee took damage as if hit by all of the spears.

Ten seconds seemed like a good cooldown time. It never took to long for it to come back and, when playing against a barb you didn’t feel like they always were using it. If there was no cooldown on this skill it would have had to be a Fury spender. Out of all the movement/CC skills the Barb has, this one would be the only one (I feel) that could be a Fury spender. It wouldn’t change the overall feeling of the barb, something that making Leap Attack with no cooldown would do.

Leap Attack with Alabaster Runestone “Death from Above”

Lets just get one thing clear, Leap attack isn’t this awesome damage dealing skill. If that’s what you’re looking for in a movement skill you have come to the wrong place. There is no rune that turns it into a true damage dealing skill. As soon as you come to grips with that fact, you will begin to appreciate what Leap Attack can do for you. Go look at Furious Charge if you want damage in a movement skill.

Where Ancient Spear was great for bring weak targets back to be finished off, Leap Attack was awesome for initiating combat. The Alabaster rune would give you a chance to stun the enemies for a few seconds. As they were stunned I would use HotA as many times as I could before they either died or I ran out of Fury. If by chance more then one target was standing right on top of each other you could get two kills in this manner.

Leap Attack isn’t a very quick skill, and sometimes I found myself using it only to have my target move out of range before I got there. I found it more useful to wait till my target was in combat with one of my team mates before using it. Most people would get tunnel vision and not see you coming. This would give you all the time you needed to Leap Attack right on top of them and with your team mate, make quick work of them. Another place it was useful was around those knee high walls. Some range classes would feel safe behind them, but when the Barb jumped to them they were far from safe.

Wrath of the Berserker with Golden Runestone “Thrive on Chaos”

Someone at Blizzard is a big fan of the Japanese Anime series Dragon Ball Z, cause they made the Wrath of the Berserker form look a lot like a Super Saiyan. (their 3rd form to be specific) When you used Wrath of the Berserker you would grow lose all your armor graphics and have long spiky hair. Like with the Archon form of the Wizard, most would run when they saw a Barb in WotB form. As we all know, the transformation was more then just cosmetic.

While in WotB your attack speed and movement speed noticeably increased. Also, your Dodge change increased but it wasn’t as noticeable as the speed bonuses. The last bonus was a +10% “Critical Hit”, now I believe that bonus was to your Critical hit damage not your chance to get crits. I say this cause, when you did get a crit in WotB form you seemed to do more damage. As talked about on the Podcast, and as I talked about up top, when you got a crit with Hammer of the Ancients in WotB form you could get massive crits. These alone made the skill useful.

Thrive on Chaos was very noticeable during the game, I was able to say in WotB form for a min or so each time. All the Barbarian had to do was use Leap Attack and Ancient Spear as soon as they were off cooldown, and throw in a Frenzy attack here and there to keep the form up. The only time it would go away was when there were no one left to kill or everyone had run far away.

I didn’t understand why they picked “Bravado” for this build. In truth, I didn’t even notice the knock back from the rune. (They might want to make it a little more powerful) I would have gone with any other rune besides Golden. “

Mob Rule” would have been much better. I am sure most would agree. Just cause the rune didn’t have much impact doesn’t mean the skill itself didn’t.

This was the most powerful survival skill in PvP. (The Monk’s

Serenity was a close second) For 5 sec you took 65% less damage. You could stand still for those 5 seconds and let a DH unload with everything she had and you would have only lost maybe 1k hit points. Ignore Pain was even more powerful when you were below 20% health. When you where the passive skill

Relentless would kick in. With both going you would take so little damage, smart players would just try to attack another target till Ignore Pain was gone.

The three Barbarian passive skills were:

Superstition : Another damage reducing skill, that not only helped keep you alive but also help generate Fury, This was the reason most DH hated Barbs, cause not only did their attacks do less damage but after a second or two of being hit by Rapid Fire the Barbs Fury was full.

Relentless : Not just more survivability. This passive gave the barb unlimited Fury when low on health. One could spam Hammer of Ancients till they were either dead or their enemies where crushed.

Bloodthirst : When you got a big crit you would really see this come into play. It wasn’t OP but it was a nice bonus to your health.

I truly enjoyed playing as the Barbarian. He felt powerful, his skills worked well together. I was only disappointed in Frenzy and the rune on Ignore Pain. It would also be nice if Leap Attack did a little more damage. For me the Barb was a close second as far as the class I had the most fun with.