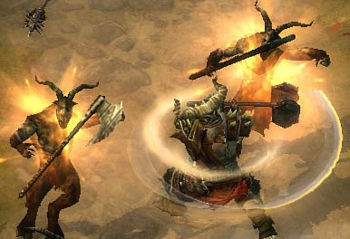 After transcribing and posting all the Barbarian skills earlier this week, we have now started to get all of this information in to DiabloWiki. With more notes, and in a structured in a way, the Berserker skills are now described more individual detail.

Our new and very enthusiastic contributor DxAxxxTyriel is the primary force behind this, so huge kudos to him, but do improve on his work yourself by fixing any errors you might find, or, more importantly, help us find MORE IMAGES to add to each article!

First out with a DiabloWiki level of quality is the

Berserker Skill Tree, which is much updated from the older versions you still can find in the

Further, Eoweniel has also done a great job on adding

Barbarian skills as well as other edits, and TheWanderer, Defx, Telzen, OmniSliver, Freeze, Asteria and Sjassy also deserves a big thanks for their efforts in keeping us all up to date with all the Diablo III details!

Keep a look out for further skill updates, by the way. We will soon have polished the Juggernaut and Battlemaster skill trees, and present them as well!