The @Diablo twitter feed coughed up another interesting tidbit today, about one of the Witch Doctor’s minion skills. 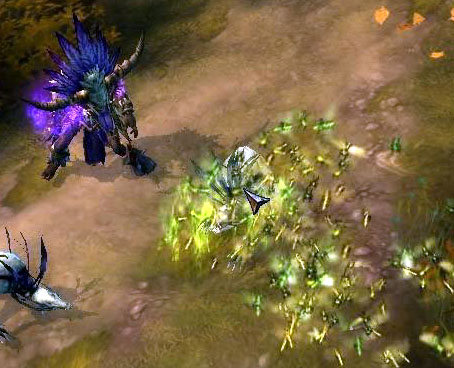 Witch Doctor skill and the creature(s) it summons, what might these rune effects be? Thanks to Jay Wilson at Gamescom and Bashiok more recently, we know quite a bit about the current effects of Runestones in Diablo III. Only Hydra has been fully detailed, and since every rune rune has at least 1 and often 2 (or more) wildcard effects that do whatever the devs thought would be coolest, there’s no predicting the full battery of rune effects for any skill. Let’s try some guesses for Mongrels, though.

As Bashiok told me a couple of weeks ago, there’s a lot of “plug and play” experimentation going on with runestone testing, as this Mongrel example bears out. Not one of the 5 rune effects are obvious, when applied to the skill, and even the ones that seem the most straight forward still allow a lot of leeway in the application.

How about some wildcard Mongrel runestone guesses? Elemental damage is a good bet; the dogs could previously be enchanted with poison or fire by other

Witch Doctor skills, and the runestones seem a good way to work that back in. Other rune effects might change their AI, making them much faster and/or more damaging. Or, since the best damage a Mongrel can deal is by dying in an explosive

Sacrifice, perhaps one runestone could cause them to spontaneously Sacrifice themselves whenever they took a big hit, or took melee damage from multiple enemies, reached some set nearly-dead % of their hit points? The possibilities are countless. Add your own in comments.