We’ve heard from lots of fans who have already received their official Diablo III strategy guides, or who say they’ve been informed that their Bradyguides have been shipped. So it’s not a surprise that we’re seeing photos of them turn up. Today brings 16 pictures which show every single

Achievement in Diablo III, thanks to Gruenel who posted them in our general forum.

It probably goes without saying that these are massively, horrendously spoilery. Every Elite monster is mentioned, every quest is named, details of the final story and plot twists are uncovered, etc. Do not read them these Achievements if you don’t want to spoil a great many of the discoveries you’ll have during the course of the game. 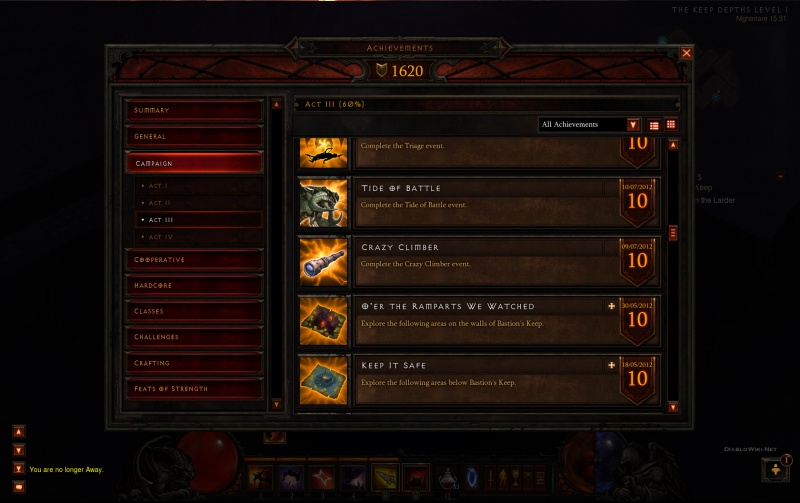 I did anyway, and here are some notes on them, carefully written to avoid revealing any specifics or spoilers.

There are a tremendous amount of achievements. Aside from page 1 and page 16, all the other pages have about 33 achievements listed. In total there are around 500 Achievements, and maybe 2/3 of them are all but unavoidable while playing the game. You get achievements for reaching level 10, 20, 30, 40, 50, and 60 with each class, for equipping items, rescuing the Artisans, for recruiting the

Followers, for killing each Elite

boss, for completing each

quest, and so on. None of these are class specific, and in most cases you get all of these on all four difficulty levels. As players saw in the beta, the new achievement pop-up was a pretty constant companion during your first game after a character wipe.

There are numerous achievements that emphasize perfect play or unusual play styles. Numerous achievements are awarded for killing various Elite bosses without taking damage, or within some short period of time, or without using any health potions or globes, or while not wearing any equipment, or without being hit or trapped by various special attacks, or for killing the boss before you kill any of their minions, etc. (The only specific one I can mention without being spoilery is Headstriker, the skeleton who appears during the Rescue Cain segment we saw in the beta.)

There are numerous achievements that can only be achieved by very high level chars replaying easy content. Completing each act in under an hour. Killing Elite bosses in just a few seconds. Etc.

There’s an achievement for leveling 2 of each class to level 60. See, rerolling does exist in D3!

There are dozens of odd and quirky achievements, many of them class specific. Reflect more than 10 projectiles at once with

Mongrels at once without using the actual Summon Zombie Dog skill. Break 2000 objects with

All of the basic achievements are duplicated in

Hardcore as well, but I didn’t notice any specifically for HC. The basics include reaching level 10, 20, 30, 40, 50, and 60 with each class, killing each type of boss and champion, etc. There are no achievements for dying in Hardcore. Not even for losing one of each class at level 60.

All of the basic achievements are repeated in multiplayer games also. So you need to kill Elites, finish quests, etc, with other players in your game. There’s even an achievement for joining a public game where all 4 chars are a different class. The only MP-only achievements involve resurrecting dead players. (These are also the only softcore-only achievements.)

Click through to view the (blurry) images in thumbs, and click those for the large view. You can also view them in our Spoiler Datamined Info Gallery, if you prefer that format.